Papers posted, new posts written, luggage ready.  Riding in the airport transfer car.  Barcelona here I come!  That was my expectation for the day.  Simple. And it was. But I managed to live it with a few raised stress levels.

Breakfast down stairs again seemed like a trouble-free zone, until a pesky tiny hot globe tomato spat itself liberally over my white shirt when I tried to spear it.  It is so warm here in Buenos Aires that I was able to scrub out most of the stain upstairs and wear the shirt immediately with minimal visible damage unless a closer inspection was made.  This shirt might be given to the homeless in Barcelona before I leave.

I was all set to give another blouse (one that I had brought to wear on the Gala nights on the ship) to a homeless person in Buenos Aires but couldn’t find a woman. To give it to a man without having the language to suggest he donate it to his wife, sister, cousin etc – well I thought it was all too difficult. Over the coming days I will work on my language ability, so I can dispose of it.   I have made myself a pledge not to try and think in French when I go into southern France on Friday.

The piece de resistance for this morning which took over an hour was my experience at a local post office.  Yesterday I had walked there and found it closed, so this morning I meandered along ready for the 10am opening.  In the minutes beforehand, a queue developed outside the entrance.  I thought it wise to join that line, feeling sure that local knowledge was important.  At a leisurely time post 10am, the grill wound up and the door was open.  I grabbed a ticket from the machine to indicate order of being served and walked into a dilapidated large room with a row of cashiers, and a long wall of tired metal chairs. In two booths sat disinterested cashiers not rushing to activity, while no one occupied the remaining booths.  Along with two dozen others, I sat. At the far end I could see the word paqueteria and wondered if that might mean I should be standing there (did it mean sending packets?).  Neither of the two people either side of me spoke English but when I got out my little Spanish phrase book, I knew they knew I was lost or could be. But they indicated I should wait for my number to be called. I looked at my number. 328.  F….k how do you say 328 in Spanish and more than that how do you hear it/recognise it when called.  I was alert for an ocho. I heard six then seven so was alert for the 8. When it was called, I did recognise it, and everyone looked at me and urged me forward. Wonderful stuff.

I asked, in my limited Spanish, did she speak English and the lovely (heavens we almost became good friends over the next hour) woman said un poco so I knew her English was possibly less than my Spanish. I was able to ask and did explain in my few words I needed to buy an envelope and I showed her the bag of brochures and papers.  She nodded wisely and disappeared into the dimly lit back of the building. For ages.  I took many breaths and hoped she hadn’t died.  I was aware the space behind me was filled to the brim with waiting people, now standing because no seats were vacant.

She returned with a large box. I laughed. Almost hysterically. Even she saw the funny side of what now looked like a puny bag of papers going into a huge mausoleum. She walked in the other direction and, still within sight, produced a large slightly padded envelope and waved it towards me.  I smiled in anticipation. Yes – that looked promising.   But on trial it failed. My documents and brochures were a smidgin too wide and not easily foldable.  Our shoulders slumped. Then she launched into a wonderful long explanation of how I could go out somewhere close by and buy something more suitable much cheaper.  I didn’t understand the detail at all (besides I had limited time with a plane to catch).  I shook my head and said the box was okay. It was easier.  For all of us.

Okay, and the box was handed over the high glass wall by both of us reaching up on our tip toes.  Please fill in the frontispiece and bring it back to me were her instructions.  Off I went and looked at the front of the box.  F…k which boxes do I write what in.  Destina….io seemed like it would mean destination, so I added in all the particulars of June’s address and contact details.  The other section looked like it should come from me but needed an address.  Okay. All too difficult.  I waited until she had finished with her next client when she affirmed it needed my Buenos Aires address. Is the hotel okay. Yes. Hmm well I don’t have all the details.  Bless her – I showed her the street map. She googled, and we came up with all the details required to meet the needs of the Argentine postal service.

Okay – the box is labelled. I would have liked to ask if the edges could be taped so others wouldn’t open the box, but I let it go – I didn’t have the language for that kind of sophistication.

Now the customs declaration. Your passport. Oh f…k it is in the hotel safe.  But I did have a photocopy and she didn’t mind. I just needed the number to add to all the documents.  What are you declaring? My phrase book gave me a word to latch onto – papel (papers).  Couldn’t find documents, brochures, booklets, CD with pictures of me on the ship, etc so Papel it is. I did write ‘papers’ as well so that Australian customs can work it out.  Trust me, there is no plant matter, no carved wooden idols, no archaeological artefacts, no fish or cooked chooks as others seem to want to bring into Australia (noted from my watching the television’s Border Control programmes).  Only one CD and lots of paper.

Fine. We seemed ready to do the money thing.  She writes down the large cost in pesos and flashes it to me (thank goodness – some businesses write charges down in US dollars and I must ask them to redo it in pesos). I proffer my credit card.  No. Only cash. Sigh. No tengo that amount of cash I say almost with a laugh because I am so clearly not in sync with how the postal system works.  She doesn’t seem surprised.  She pointed. There is a bank next door. Right, I thought. Okay.  Fine. She indicated the box would stay with her until I returned.  And I trusted her completely as I left the building.

At the bank I learned a new thing. I seem to have mislaid one of my bank account cards; I knew the other was in the safe back at the hotel but, even as I sit typing this post, I cannot be sure whether I have it or I have lost it (will wait until I unpack all my luggage in Barcelona to be absolutely sure it is gone. Risky I know but I would prefer to do that than lose access to it entirely by cancelling it if, in fact, I still have it somewhere.  Of course, it might be in ‘the box’ travelling to Australia.  How amusing that would be).  Thankfully I was carrying a Travelex card set up specifically in Euros and Yen (with the exchange rate costs already spent) nevertheless it was my only option. The cost of sending this box became ridiculous, nevertheless once I had started the process there was no going back.

Back into the post office and we are both positively beaming at each other. We had an understanding. The rest of the people in the post office were glowering no doubt thinking I am a gringo being given preferential treatment.  Help is the word I would use; mostly out of turn for sure but help and kindness.  Once I made the payment, she grabbed the tape and worked hard to cover each of the box’s orifices.  All done, she indicated.  I performed my profuse ‘mucho gusto’ routine and we both wished we could speak to each other. The saga was over.
There was no way I could ask when the box might leave the post office, leave Argentina or in fact reach Australia. Again, that would have required the use of too much complex Spanish between us.

Clearly the rest of today has been comparatively simple. The jacarandas are out in bloom and the city looks colourful. 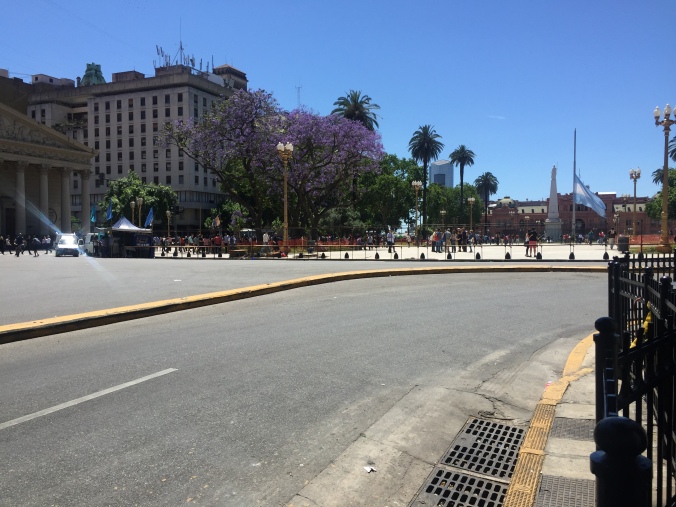 When I arrived the first time in Buenos Aires, I was given a subway card which had been left by a previous guest. I returned the favour by leaving mine with the receptionist and asked her to pass it on. The subway was very near my hotel.

I discovered another place with smorgasbord vegetables and got a take-away for lunch.  Another win for today.

As I waited to go to the airport, I recorded a few items of the new and the old in my hotel. 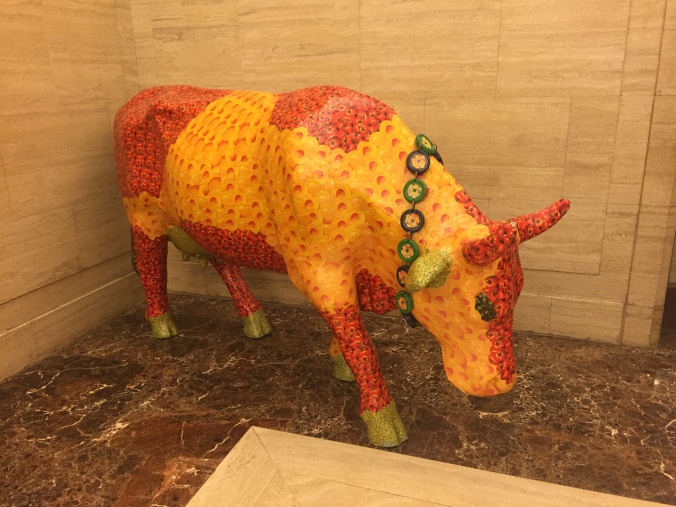 The transfer car went smoothly because the driver chose less stressful routes to the airport, than those I had experienced after my first landing in BA.  Collecting my ticket was a piece of cake and I was as friendly as could be with the First-Class ticketing lady (where I had been directed because she didn’t have clients) – always hoping when I get to the gate, they have upgraded me to First Class.  Since then I have been comfortably ensconced in the Star Alliance (which includes Lufthansa) lounge with a few glasses of refreshing Campari and Orange.     This has given me the freedom to set up my computer, plug into the power, and tap away. Drivel you say?  Just my memories.

And now (5pm-ish on Tuesday 20th) I will lodge this post because, for the rest of today, I will be flying.