I woke a little before 6am feeling the slightest of rolls and following a very satisfying night’s sleep.

When I opened the curtains, the sea was like a large rippling pale grey silk sheet.  Half an hour later the surface was ruffled with strong contrasts between light and dark. But no waves, except for those formed by the bow of the ship as it charged southwards. See the view from my cabin this morning here.

Marvellous to have my own tea set-up so I boiled the jug and started the day well with a cup of tea. Noting breakfast started at 7am, I soon headed off; only one person preceded me into the impeccably presented dining room.

At reception I collected today’s program. 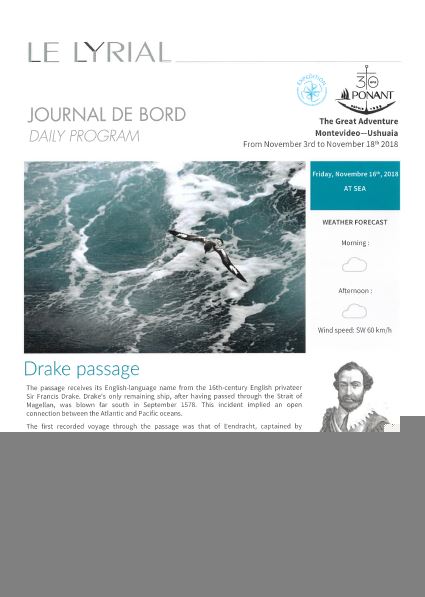 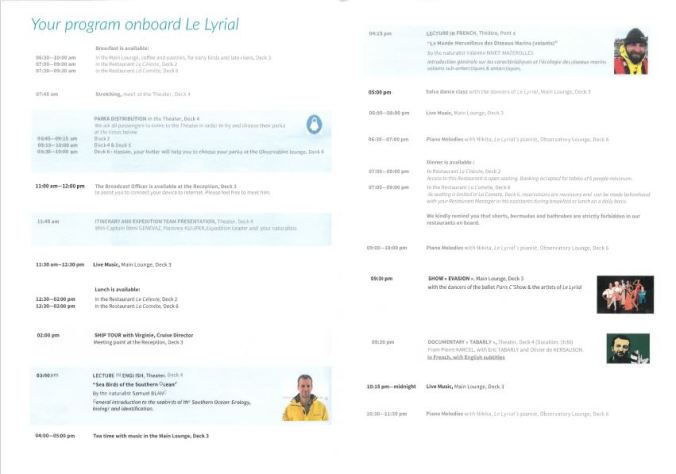 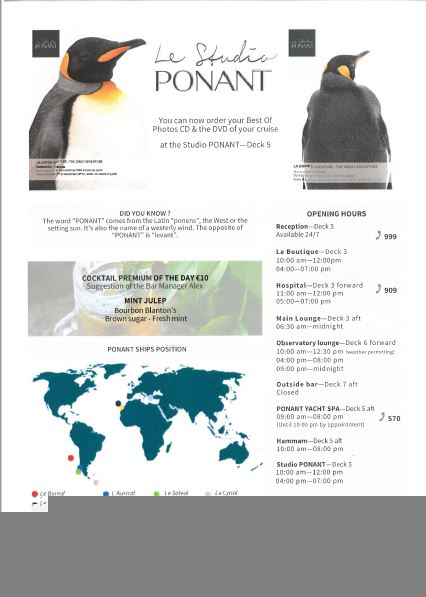 Before my breakfast had settled (shame I didn’t have the program beforehand – I would have exercised before eating), I was off to a half hour stretching class with the ship’s lead dancer.  One man and all the other women in various styles of ‘active wear’.  Not me. Nobody over 50 except me.  Many moves were similar to yoga moves and I felt much better for those movements.  Each day there will be something equivalent and if time permits (well there are so many other things on board to occupy my time) then I will be there. The ship also has a gym room with treadmills and other equipment.  I may check that out before lunch. After walking an average of 10kms or more a day for the past 10-11 days I don’t want to lose that walking fitness. (Note – I never did have time today to visit the gym.)

This morning, while I sat typing, the Captain spoke; a sperm whale is visible off the port side.  Out I raced (my cabin is on the starboard side) and watched the whale blowing off steam (as it were). Then we all marvelled when its massive tail rose from the ocean before it dived deep. I understand they can stay way below for around 2 hours, so we dived back into the warm insides of our ship.  Other passengers used their zoom cameras to take detailed photos. By contrast, while the whale was clear to see with my eyes, you will never pick it in the tiny speck of white lace of water in the middle of my mobile phone camera image.

It was time to collect my Antarctic parka.  We were given various sizes of parkas to try on; when we found our best size then we were given a packet with an unopened jacket.  Of course, my comparatively small upper body size when compared to my larger hip measurements created havoc – choosing a parka that fitted was a challenge.  It is massively large on the top and about right down below. The sleeves are too long, but I will get used to that – it does mean more warm air can be trapped in there once we hit the serious cold.

At 11.45 am the ship’s itinerary was presented in association with the Expedition Team, by Captain Remi Genevaz and the very impressive expedition leader Florence Kuijper; over a dozen naturalists introduced their specialities which ranged from birds to marine mammals, geography, geology, plants, environmental law, geopolitics and history.  Passion. They all had passion, and they explained that many of us will catch the ‘Polar Bug’ and be forever changed by our voyage of over 6000 kilometres. They stressed we were not on a cruise but part of an expedition. They noted that because we would be the first ship reaching the South Georgia Islands since winter, the environment will be pristine, untouched, and presented in beautiful natural glory.

Florence urged us not to ask the question ‘what is it I want to see?’ rather to ask, ‘what is it I want to experience?’ I am surprised to realise I don’t know my answer to that question – it’s an impossible question to give a precise answer to. My best answer is to say that I want to experience, without injury, situations which are outside my comfort zone. In so doing, I want to remain sufficiently mindful amidst the sensory overload. I want to be able to remember what I see and smell and hear – not just remember scenes that are packed into my photos. In fact, Florence recommended we don’t bother with taking photos because looking and feeling the marvels of the environment requires our eyes not our technological devices (Ponant’s professional photographer will be there snapping away and we can buy the photos later if need be).  She discouraged the team of American amateur photographers from lying down to take their photos because they will appear to the seals as a competitor to be fought and despatched.

Lunch – a buffet from which I picked and created a plate of salads. No surprises there.

At 3pm I attended a lecture presented in English ‘Sea birds of the Southern Ocean’ by Samuel Blanc.  He was an excellent presenter and offered 45 minutes of fascinating information. What I remember is –

Since arriving on board all I can think of is the Spanish language and today’s stretching class and constant use of French on board (perhaps a half of the guests are more comfortable with French than English as observed by attendance at the Expedition introduction earlier – the French had their hour before we had the English hour) is helping me to reorient my brain to the French.  It was so bad yesterday that when I went to say thank you, I could not remember for the life of me, merci beaucoup.  All I had was gracias, much gracias, me gusto mucho, etc.  I always feared this would happen.  When I return to Argentina and then onto Spain, I will have the new problem of forgetting the French and reorienting myself to Spanish.  Admittedly all the staff on board speak English but not all understand my accent that easily – even though I am careful to s p e a k  s l o w l y.  As for the guests, including perhaps two dozen Australians, I have met a number of people who come from the USA but all come from other countries such as India originally, a couple from Israel, a Belgium woman who has been on this ship since Tenerife, quite a few French and Germans; there around 200 people on board so I haven’t scratched the surface in terms of meeting other guests.

Five o’clock was Salsa dance class time. Since I am trying to accept everything on offer and not waste a moment, off I went.  The ship photographer was in attendance:

Others who I already knew were waiting to start when I arrived, and we all participated with gusto; had an extremely amusing time with our two lean, agile, flexible instructors looking patient.  ‘We are up for it again’, we said but they didn’t make murmurs about future classes.  It was loads of fun and we collapsed into waiting chairs and the ever-attendant staff brought us full glasses of our favourite beverages.

Now showered and freshened, I have been sitting out on my balcony with the sun on the way to the horizon and sea in all directions.  I am empty of new thought and can only think in cliches: it fills my heart with gladness; my cup is overflowing.  Oh oh.  The round sun has gone, and only grand expanses of intense reds, pinks, blues and greys remain. The sea is a wonderful leaden green-grey; rich and dense.

Vegan options are deliberately on the menu at each meal the chef told me when I arrived at the restaurant (later I found this was not the case). I  forgot to take my camera to dinner; a small entree of a large skinned and steamed tomato dome garnished with a leaf of rocket resting on a thin bed of white quinoa and eggplant. The main was a mix of burghal, lentils and a range of tiny cubed vegetables with a fresh taste of mint throughout.  I was delighted.  Everyone else is happy with their meals as well – lots of variety.

I wandered down to the front of the ship and found the library; picked up a book about the work of an artist (J B) who exhibited in the 2017 Venice Biennale.  An extensive body of work was reproduced; the flame was the artist’s ‘equipment’ and burning of paper and other materials was the method. I did like some of the imagery and I can imagine a whole pavilion full of his work would have been stunning to view.  The curator’s essay was variably informative and interesting or opaque and wordily opinionated under the guise of really ‘getting at’ the meaning of the artist’s work.  One phrase has stayed with me; ‘books are the folds of an artist’s soul’. The essayist continued with the notion; he understood the folds are the traditions and rituals of communities and religions that have conditioned and backgrounded an artist’s life.  It is the concept of a folding soul that I am grappling with.

Later in the evening, at 9.30 pm a documentary was screened; ‘Tabarly’. The daily schedule blurb informed me this is from Pierre Marcel, with Eric Tabarly and Olivier de Kersauson and would be screened in French with English subtitles.  Despite eating less this evening, I was not able to hold off feeling tired and went to bed before 9pm. I am here to learn, to be a sponge and take on every morsel of information I can gather, however sleep is what my body craves. Simultaneously a dance show was presented elsewhere – maybe another night that will be rescheduled and I might attend.  It is not the greatest priority for me.

Sunday today has been a wonderfully satisfying first whole day at sea. I can only imagine now that the days will fly. As the ship glides onwards, I will slip into bed for another night of silky sleep.