At Cooper Sound, a crossing of wind conditions created serious waves and we rocked and rolled. 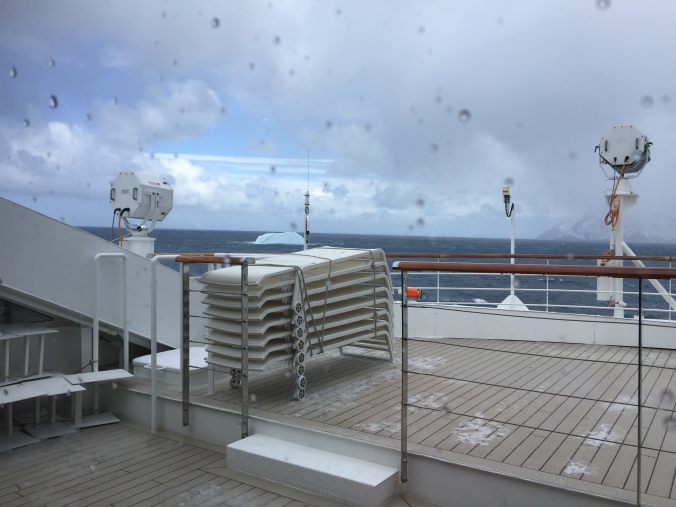 Twenty minutes later we reached the entry to Drygalski Fjord, an inlet approximately 11 kms long and not much over a kilometre wide. We sailed along with a careful monitoring of small icebergs to the left and right.

Walls of mountainous rock, in part thick with snow but mostly well dusted by snow, stood to attention and lined our route.  See a video of some of the spectacular scenery here. 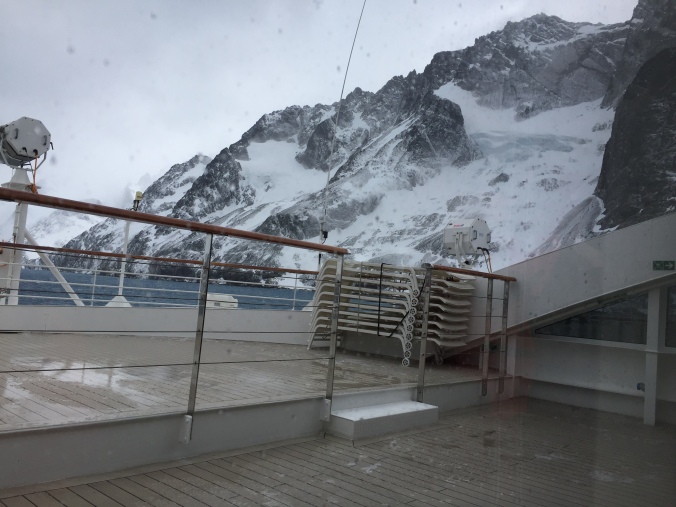 Towards the end of the channel chosen by the Captain and his crew, spectacular glaciers marked the landscape.  Previously I had seen documentaries with glaciers that descend and enter the sea parallel to the water’s edge. That  is what I thought a glacier did. But today I was surprised when I saw glaciers that finished high up on the side of a mountain and the big chunk edges hung hundreds of feet above us.  A waterfall effect was noticeable below these high mountain glaciers. 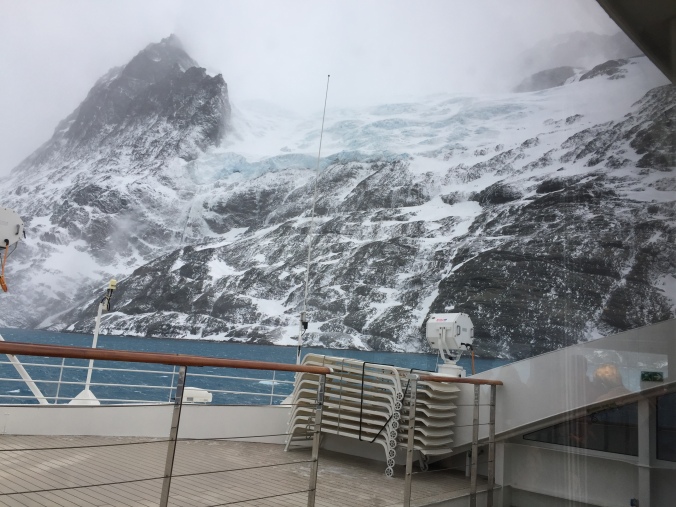 At the end of the Fjord channel that we travelled, our path was finally blocked by what I would have called a typical glacier, one that descends into the sea.

While watching, a huge block of ice collapsed sending shock waves through the water.  I was amazed how well the ship’s stabilisers worked and we did not feel a water bump.  This video, taken from inside the ship looking out, may give you a sense of the atmosphere.

The ship turned around at the end of the Fjord and set off for the next hour to reach the open sea. To reach the wind and the drama of the waves.

I have eaten lunch. Will finish this post and then perhaps retire to bed to ride out the convolutions. And now we are into that maelstrom.  Adieu.

Okay I’ve slept, dressed again, been to a Recap session where further information about the sperm whale, the eyes of seals, the distinguishing marks between King and Emperor penguins and the tagging of albatross was presented.  I have returned to watch the waves as we sail around Cape Disappointment (Captain Cook was disappointed to realise that South Georgia Island wasn’t the great south land).

Today it was suggested to me that all I could say in my blog is ‘I visited South Georgia Island’ and leave it at that – because the riches and complexity of the island cannot be described completely.  Words cannot adequately express the scale of the landscape, the sea, the sky nor the atmospheric effect of the changing weather.  Words cannot adequately describe the grandeur and majesty of the mountains. If you want to look up the work of German artist Eugene von Guerard, and the romanticism with which he painted large scale mountainous landscapes going on 200 years ago, then you may gain some notion of what I have been seeing. Have a look at this site or at Caspar Friedrich’s work, such as this example.

Perhaps my photos have given you some appreciation of the look of small parts of this wild island.  Perhaps my writing has given you an idea of how appreciative I am to have experienced this remote land. A land where the animals and birds don’t run away in fright, or attack you in the normal course of behaviour, as they do in the Arctic polar regions. In this way South Georgia Island has been much like my understanding of how things work on the Galapagos Islands.

During the evening I enjoyed dinner with the birthday man Tony and wife Anne from Perth, Canberra’s Phil and Jenny with her wonderfully expressive face, and Sydney’s Charles and Beverley (who retired early feeling a little queasy).  I find it interesting that no matter which Australians I talk with (and I have assumed they would come from a range of political inclinations), national politics always gets a round and people like Abbott, Dutton and Abetz are universally disliked and found deeply concerning.

Away from the parochial – We are now Antarctica bound and a new chapter will be written.  Let the continuing thrills abound!  If you want to make a donation to support the continued existence of South Georgia’s pristine environment and its history then complete and submit one or both of these forms;  the South Georgia Heritage Trust Donation form: 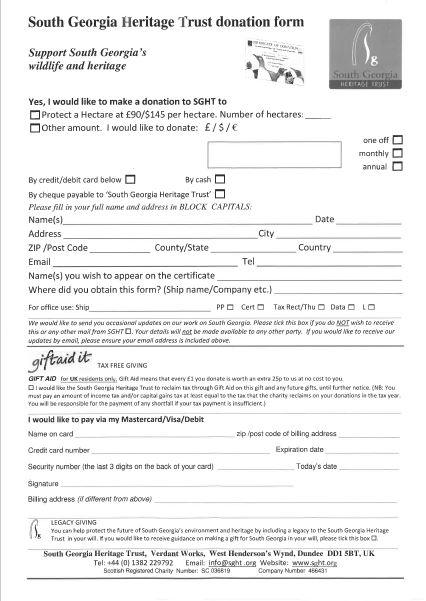 and the Protect a Hectare of South Georgia Island form