As I lay dozing around 6.40 am, the Captain alerted us that in 15 minutes we would be at Deception Island and passing into the caldera.

Perhaps we might see something, he suggested. I pulled the curtains to a snowy whiteout.

I didn’t hold much hope to see land, but the entrance to the caldera is only 200 metres wide so in time I was able to see the cliffs from my starboard cabin reasonably clearly as we entered.  Ride through the narrow ‘gateway’ into the caldera with me here.

We travelled a bit further and differently than I expected.  The air was white with snowflakes either drifting or being driven.  The distances were softened and then the edges of this mountainous world were obliterated.

The landscape appeared like soft graphite pencil sketches. The video I took from through my cabin window (the balcony rail is layered with snow), which has the melodic voice over of our Expedition Leader, contains some sort of internal error and cannot be turned into a video that can be uploaded. I have taken some stills from the video and include them here. These reinforce the pencil grey softness of the landscape.  The dark dots across the images are snow-flakes. 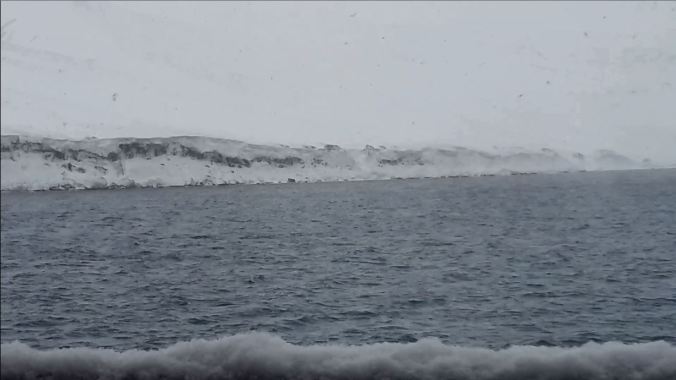 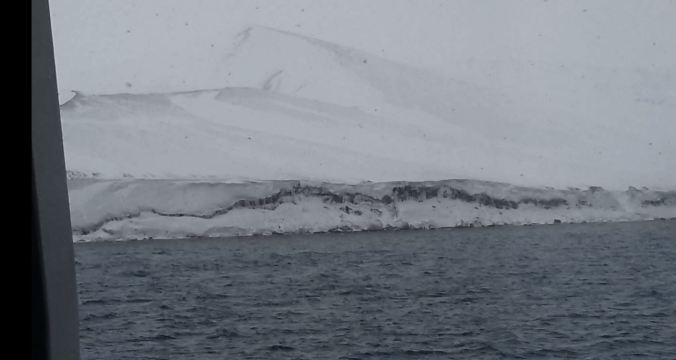 The plan was to turn right/north and anchor in Whalers Bay.  When the Captain next spoke, our ship had anchored in Telephone Bay because another ship sat at anchor in Whalers.  Our expectations of visiting a Chinstrap Penguin colony and lots of whaler social history artefacts were gone.  Nevertheless, embarkations in this Bay went ahead.  One lone seal and one lone penguin with some large birds clustered on the snow (probably some sort of albatross), were all I could see from the ship.  The black moving ‘dot’ on shore is the seal.

Once on land, everyone trekked uphill through the snow either to the left and then went behind a hill and down the other side making a circuit, or to the right and finished higher up on a steep mountainous hill. With changing visibility levels, the views were limited or extensive from moment to moment.  The intense glare from the glowing white snow and the almost neon quality light, required sunglasses even though the sun could not penetrate this snowy cloud cover. 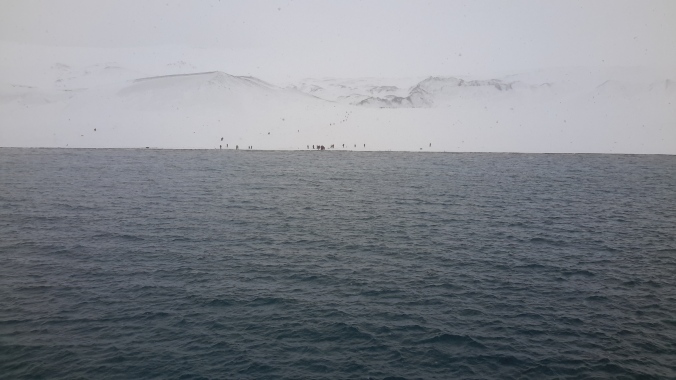 The great white southern land has been a reality. To travel here in February would be to see another view of this land. As Verity and Noel read this blog post, I suspect the images I am showing must be a surprise and dramatically different from the views and experience they had at a different time of year.

Not only is this a great white land, it is place of a great white sky and great silver sea.  A place of endless stark white, soft greys and the occasional browns.

And then the sun came out and the snow was pulsing white.  The last group to land benefited from the new light.

Deception Island is an active volcano which has erupted at regular intervals in the past but is long past due having its next.  We were informed the international protocol is that if the volcano did start to erupt while we were onshore, the ship is duty bound to leave us and sail immediately.  We were also told that sometimes sulphur steam rises and that you can put your hands in the ground/sand and find it is warmer there.  With the thick layer of snow this morning there was no sign of such heat.  This is a location which offers much in clear weather and would be worth a visit another time.