At 6am walked, subwayed, and walked in the dark around the back of the Palau de la Musica – I looked at strangers and thought they were tourists; Valerie, Linda, Kevin and Bolivian Manuel all from Hawaii.  Onto Bus and off through Spain to Baga for a coffee in the desperate cold, and a guided walk around town. Overcast and drizzling.  Yellow ribbons to free the political prisoners after the illegal referendum last year.  Flag – yellow and red is Castellan and the blue triangle with the star means this is the flag for Independence. Seen stacks of these flags now. 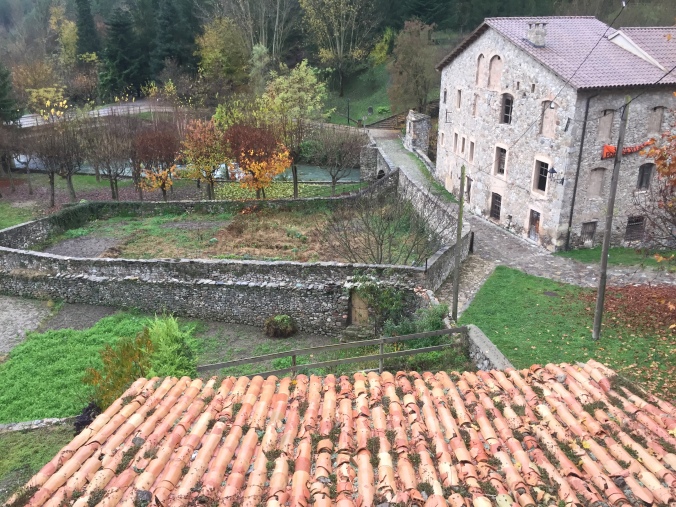 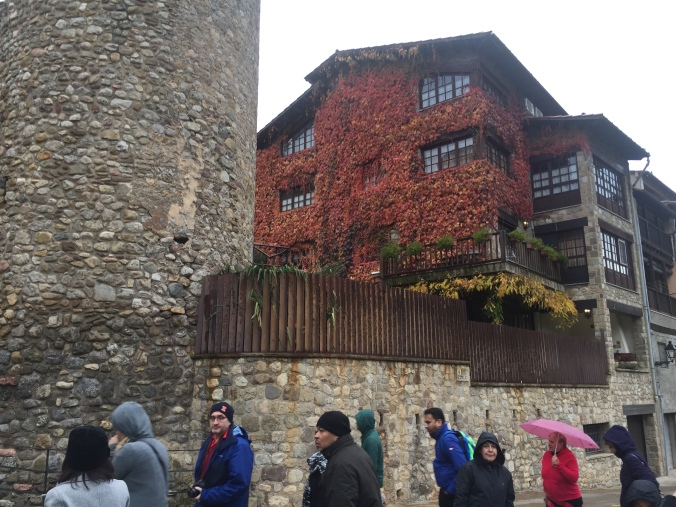 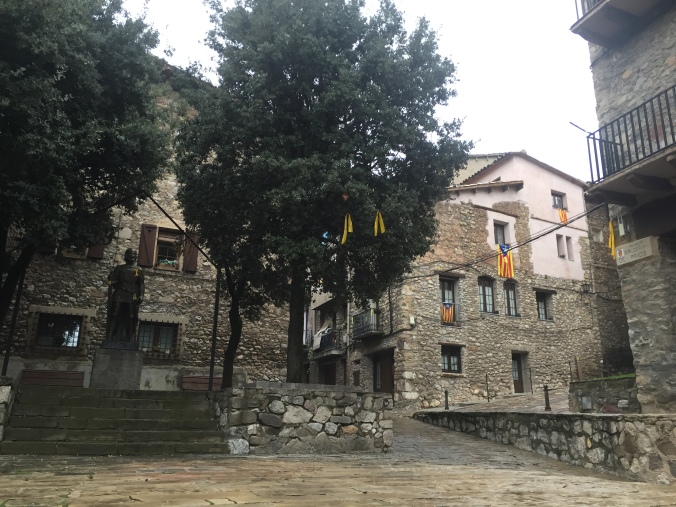 Onto the French town of Ax les Thermes (pronounced AshLeTem) and bathed feet in hot spring water.  Didn’t care my toenails and legs were disgusting to look at.  The water was almost too hot to bear but it was the most wonderful experience.  And the sun was out even though it was around freezing. 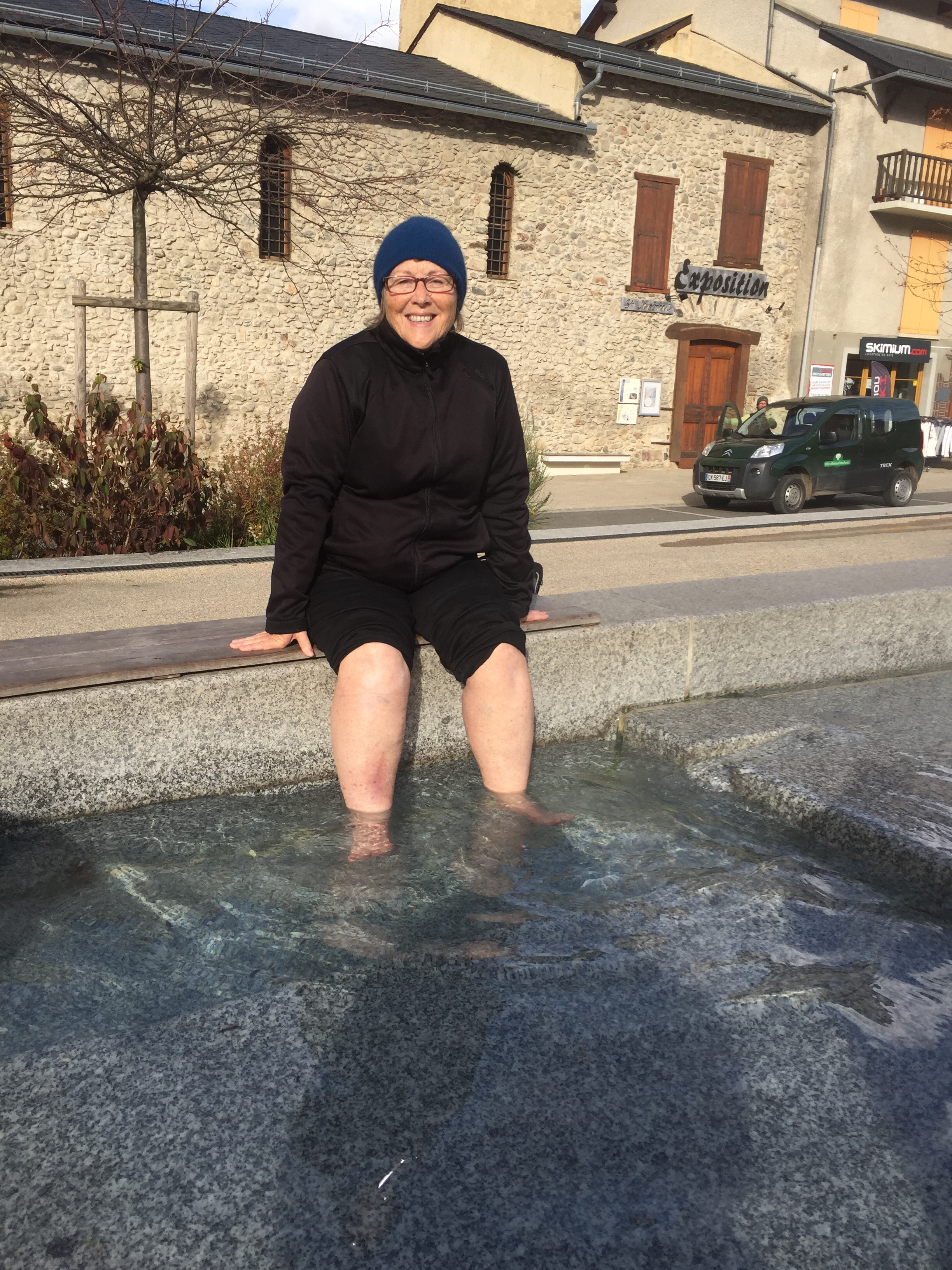 Found a hearty peasant style vegetable and meat soup which warmed me inside and I never wanted to leave the cafe. 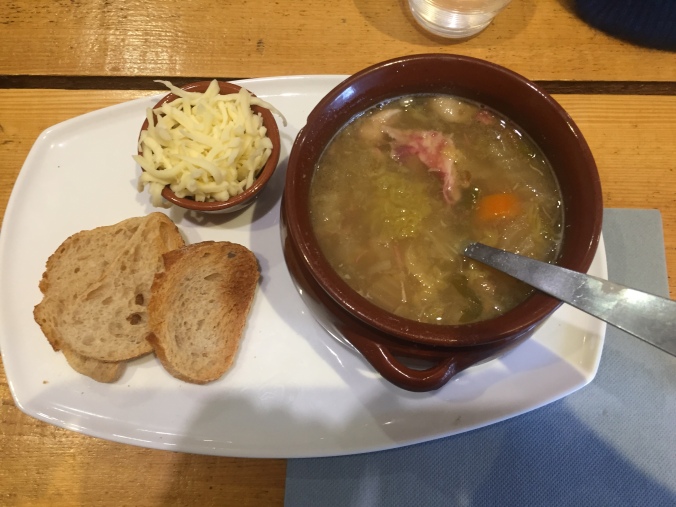 Nevertheless left and wandered around.  Sun out but desperately cold – I was wearing most of my Antarctic gear, but it was a different sort of cold (and I didn’t have my waterproof pants for one more layer of insulation). Disgusted to see so much foie gras – still, in this day and age. 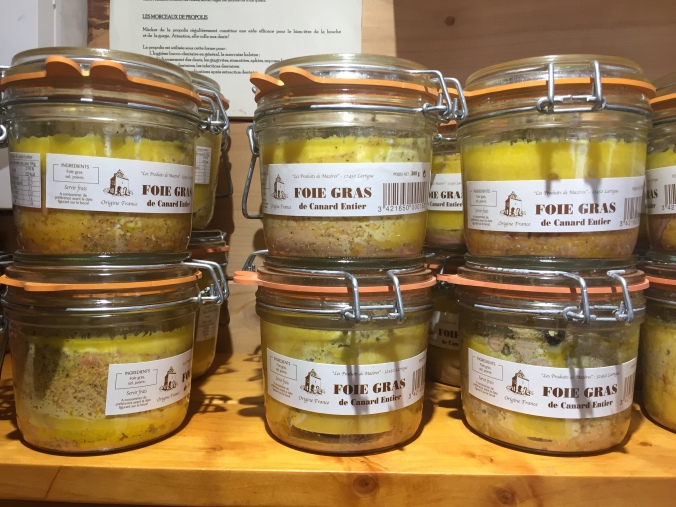 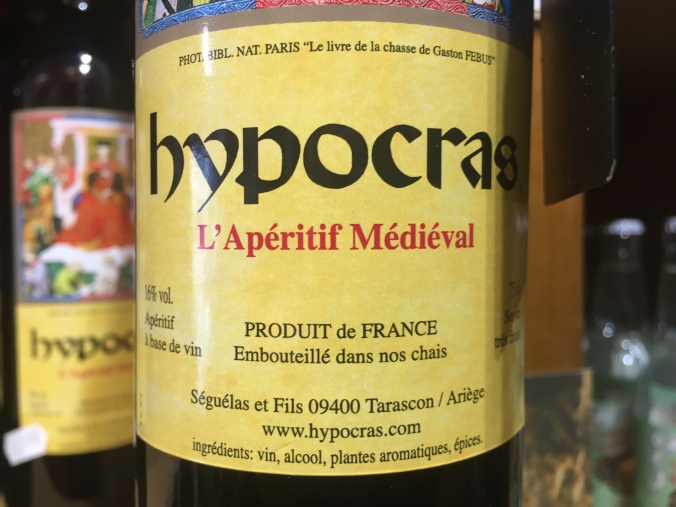 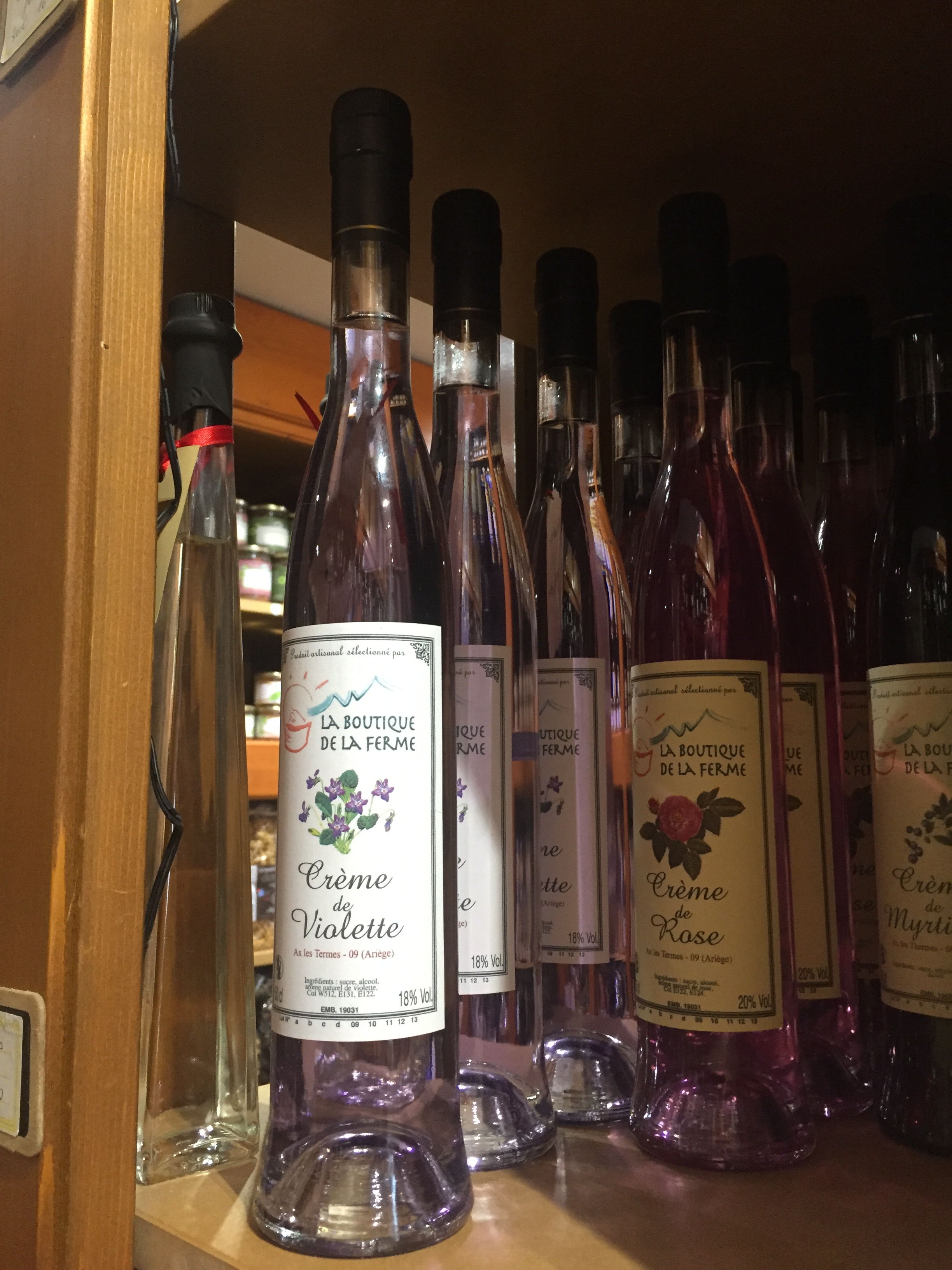 Continuing through the Pyrenees.  Stunningly brilliant country to drive through. How I would love to walk that country.  Impossible of course.  But so beautiful. So dramatic.  Despite the constantly fogged up windows – we were warm inside the bus and the landscape outside was super cold – I was thrilled to the core. 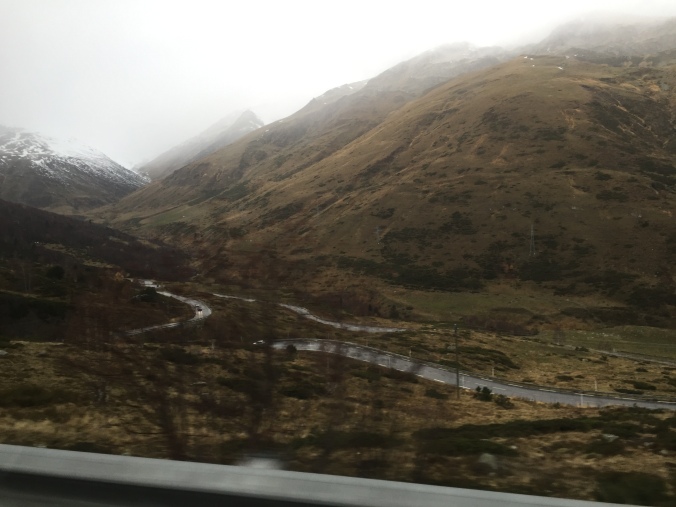 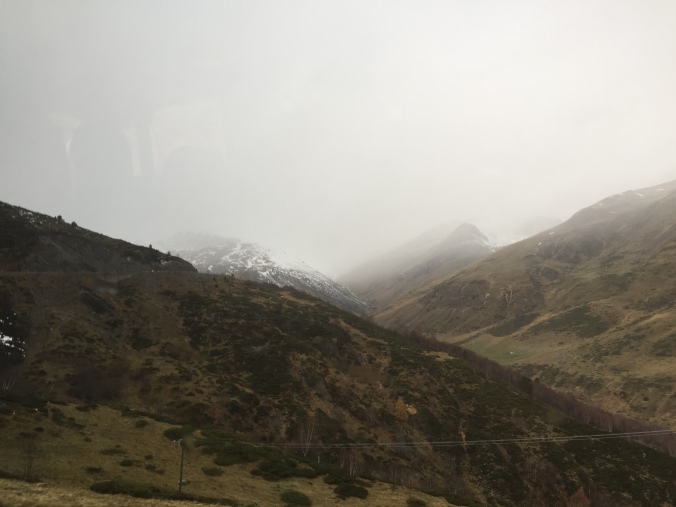 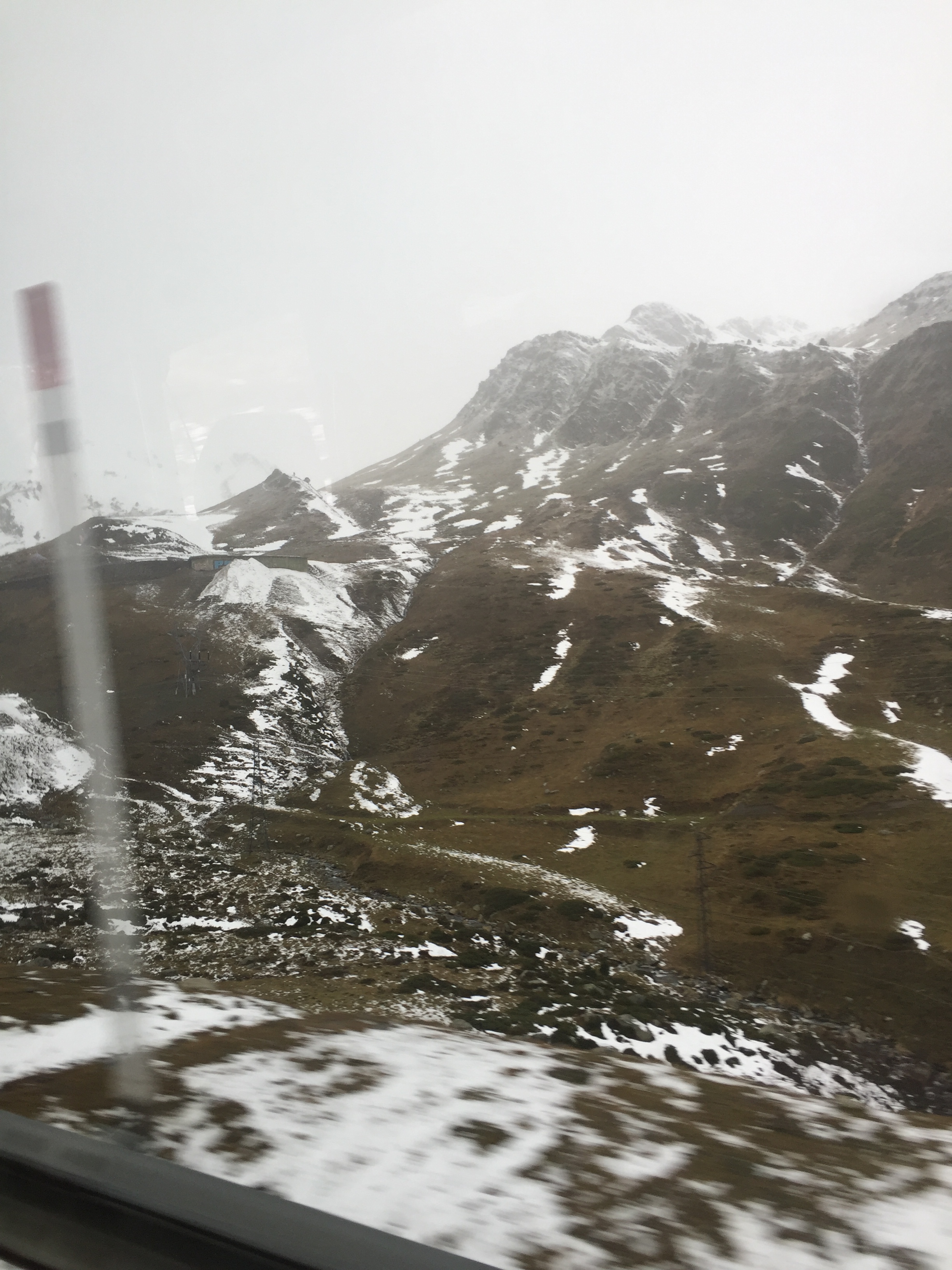 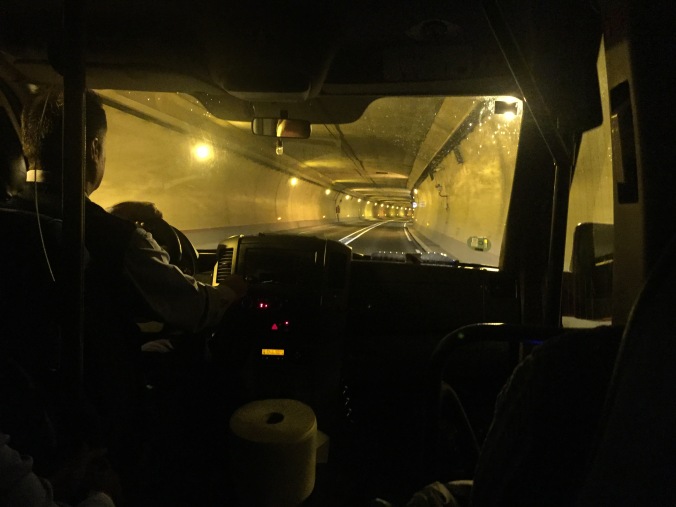 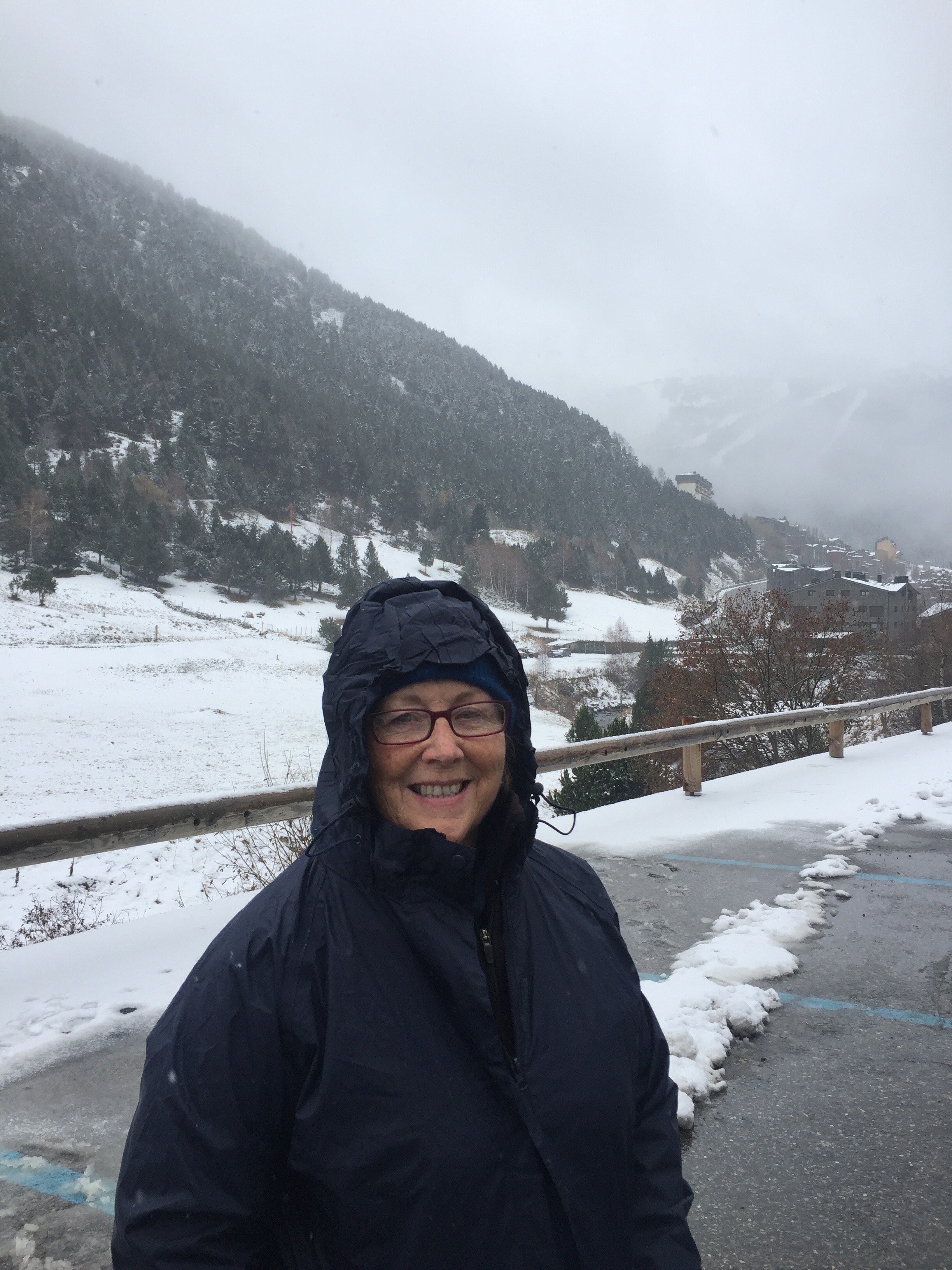 Then we stopped for a view of the capital city. 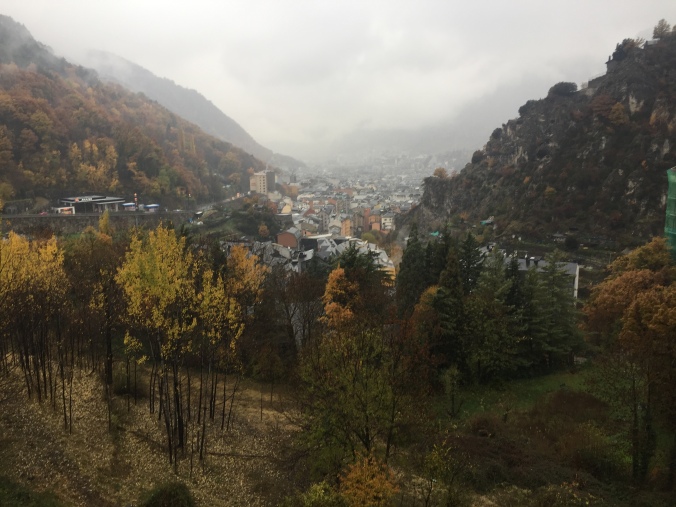 Onto the city of Andorra La Vella and snowing most of the way.  At northern border we got stamps (decorative) added to our passports. In Andorra raining – parts of the city 0 degrees, some 3 degrees and I saw sign indicating it one 6 degrees. I was wearing so many thermals, June’s possum etc and was warm and dry, but raincoat and brolly got a work out.  But it was relentless.  I walked and found a couple of sculptures including a large Dali.  Eventually I was defeated and hid downstairs in a MacDonald’s and accessed my emails using their free Wifi (a standard fall-back position in foreign countries.) without buying a thing.  My notes for Andorra: – a culture of the ski resort, of a tax haven, of a newly created city. I didn’t walk to the old city but felt the rest was designed for those who value synthetic lights and retail therapy. When I looked up, either side of the linear city is edged by steep mountains. Soft clouds patched lightly across the terraced and rocky surface – covered often with an irregular mix of deciduous and evergreen trees. The brilliant orange coloured deciduous probably a variety of birch. Saw poplars elsewhere.  And snow in bits everyone up there ready for a full cover to settle in for winter. 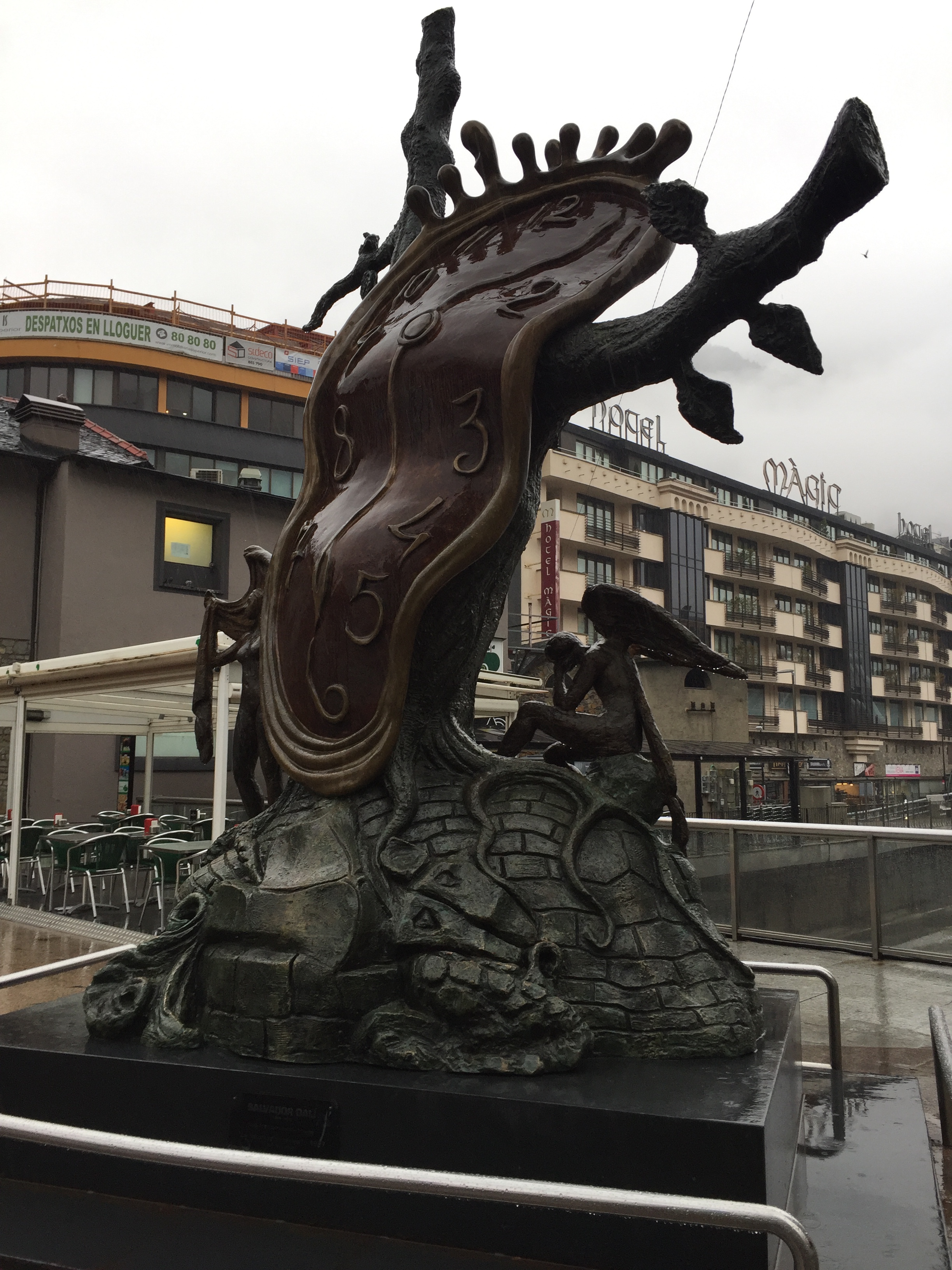 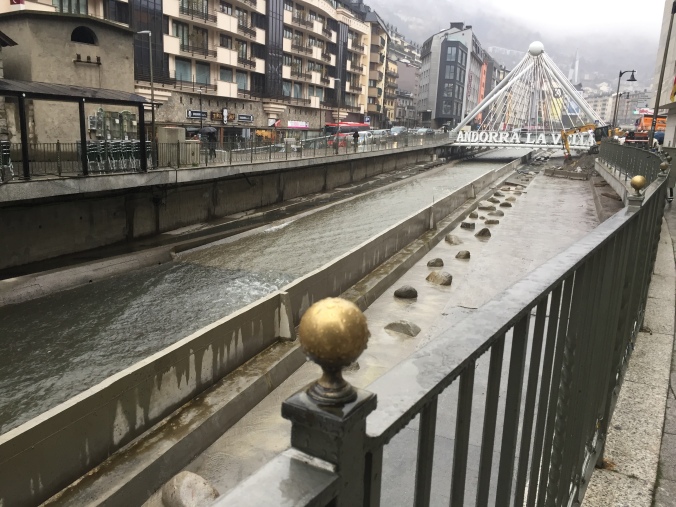 We travelled home via southern exit from Andorra and on the roads the Vuelta e espana raced on this year.  I realised that I must have watched the Vuelta intently (end of August and beginning of September this year) because I could even remember the shapes of some of the little town roads.  While I couldn’t have said exactly where I was, I felt I was in known territory. Loved it.

My happiest memories of the day included the great chats with the Hawaii foursome, being in the Pyrenees for most of the day, seeing the occasional cow that hadn’t been sent to Spain or France for the winter, and looking at the autumn colours of the day. 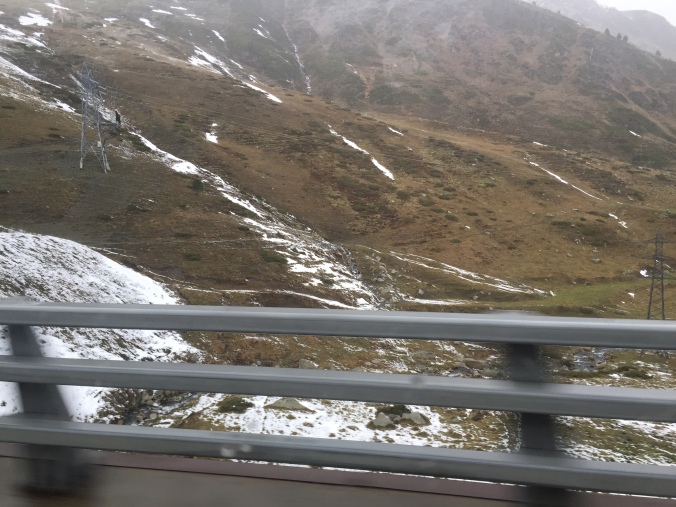 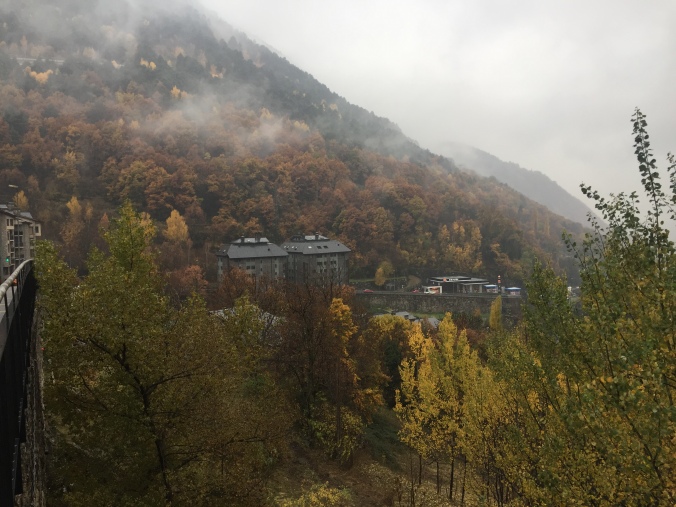 Stopped half way back on the three-hour journey to Barcelona for a glass of local wine courtesy of this Viator trip.  Convivial.  Off the bus in Barcelona about 7.15pm.

Linda pointed out Veggie Garden on the way to our stop; I headed straight there. Served Nepalese inspired Catalan food.  Terrific.  I am in heaven.

Life and travel and art and culture in Tasmania