Never sure how long it will take to reach the start of travel, I left my Barcelona hotel around 6.30am after another night of sleep deprivation and walked to a Metro station which doubled as a renfe station. I descended from the dark (it gets light around 7.45am here!) into the world of artificial light and found my way to the correct platform. As I stepped onto a train, one passenger yelled ‘this isn’t the one to the airport’.  Obviously, I looked like a tourist who didn’t have a clue. I am not going to the airport rather to the Sants station. Well it doesn’t go there either. I stepped off.  A security woman said get back on and get off at the next stop.  I did, and I did.  I had reached the Sants station and came up looking for directions to catch my Madrid bound train.  All went smoothly and easily.

In approximately 8 minutes around 800 people got on that train, disposed of their luggage in various orifices and sat down for the ride. I was very impressed. I was seated at the window when a man arrived pushing past others and spat out his newspaper, so it bounced on the seat beside me while he muttered Merde and Incroyable for all to hear.  He was tugging his large suitcase against the tide.  I decided that making any movement to initiate communication with a grumpy thin-lipped man would be fruitless and set myself up to enjoy the views.  When he methodically unravelled papers, I spotted his Austrian airlines pouch. Why was he travelling in Spain?  Why was he unhappy? Later, he wrote notes in a tiny hand for the 24th November. Was he making a record of his holiday like me, but a couple of days behind. Was he writing a letter to a son or a friend?

Meanwhile I kept spotting disintegrating castles on the top of hills, tiny farm buildings, land cleared around the base of small undulations, a gravelly soil, scrubby bushes, acres of orchards, paddocks of grape vines, big towns, small villages, main roads, sandy tracks, all manner of rural buildings and various industrial buildings.  Mostly I was amazed that the land appeared barren and dry and relentlessly stony.  But that view only comes from my comparison with various rural areas I know in Australia. Spain grows crops well but I couldn’t see how.  The endless low hills were different.  Occasionally there were higher rocky cliffs and mini mountains. Overall, I had a sense that the colour of the landscape was beige- dark beige with occasional relief from dusty greens and dusty grey browns. The photo below shows Madrid on the horizon.

At the end of the carriage a sign kept us up-to-date on the temperature outside – seemed to start around 12 degrees and was 8 when we arrived in Madrid (in my belief that it would be warmer than Barcelona the further south I travelled, I forgot that Barcelona has the moderating influence of the sea whereas Madrid is in the middle of the country and would be naturally much cooler – this cold of mine has taken away all reasonable reason and judgement).  The second piece of information was the speed at which the train travelled. I first noted the sign at 298 km/hr but later it settled on 300km/hr. Whether it exceeded that speed, I don’t know because I nodded off.  The ride was ripple free.  We whooshed along in a movement that seemed more akin to floating.

Off at the Madrid terminus at Atocha. Blue sky. Sun. Occasional cumulus cloud. But so cold.  My god. Where was my beanie? Where were my thermals? If I opened the suitcase would everything spring out and be lost?  I found the toilets and, for less than one Euro, I entered smart super clean and spacious facilities. I was able to retrieve a thermal top and layer up, but later wished I’d hunted for a beanie.  Out on the street I had a sense of the direction to my hotel but checked with a passing local and was relieved that I was on the right track (especially after forever getting lost in Barcelona).

I wandered along an avenue where flurries of autumn leaves kept me entertained, towards the Prado Museum. I knew my hotel would be situated a little before it on the other side of the road.  I looked and there it was.  11.15 and check in time was 3pm, as the receptionist reminded me. I stored my luggage and walked off.

The length of the queues around the Museo Thyssen were frightening – but this was later explained; today was a free entry day.  I meandered over to the Prado remembering my intent is to see as much work by the Spanish artist Goya as I can. 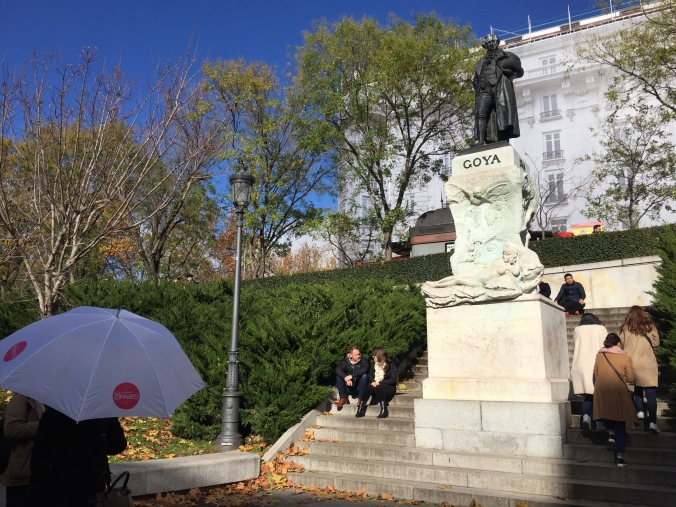 The security people told me that in order to buy a ticket for tomorrow I needed to join the long queue before me – however if I came back around 2pm, the queue might be non-existent.

On the hill was a church so to fill the time I walked up to have a look. 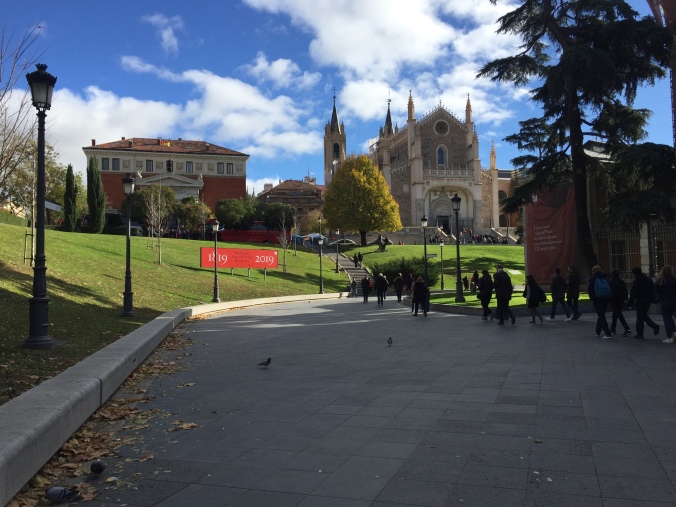 I like the way that several churches play music just audibly (not intrusively) – sometimes wonderful medieval chants.  I find it difficult to believe that after all the churches I have been to around the world, I am not sure I want to visit one more.  How strange not to feel a need to see one more sensational stained-glass window, one more extraordinary piece of engineering, one more depiction of Mary or Jesus, gold everywhere, or one more well-trodden slab or tiled floor that you know has been walked on for centuries. 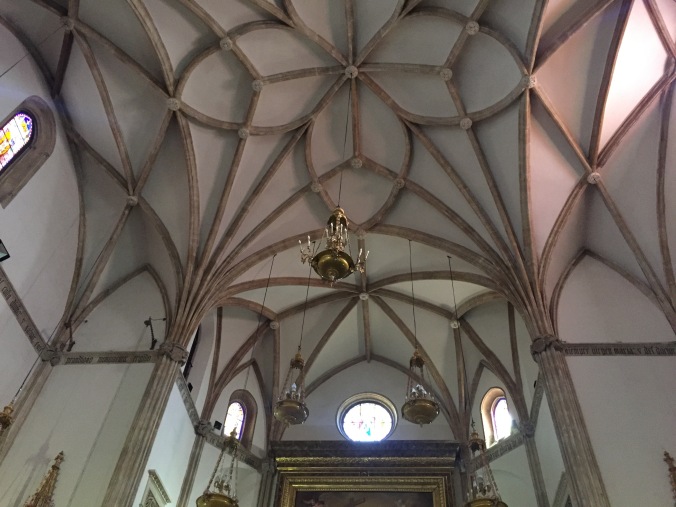 I walked from the church and headed up back streets looking for a café away from the crowds. Botanical Gardens and parks edged this area, but I wasn’t in the mood for caged plants in a caged city with caged people.  Besides, it was icily cold. I settled into a tiny place with a warm coffee.  Relaxed. Forgot the cold. Then was blasted by it again when I stepped outside.

Some women buy a new pair of shoes, others buy a piece of jewellery, or something for the garden when they want to cheer themselves up. For me, there is nothing like a haircut.  Today was a first. Never, when travelling overseas have I allowed a non-English speaking stranger to cut my hair.  I have been feeling so miserable for the past week or two, my hair had grown dramatically (a few days ago I had cut almost 2 inches off my fringe) and had become dry and simply awful, and generally I felt the Queen should be sending me a congratulatory email because I had reached 100. I knocked on the door of Giovanny Peluqueros (address- Espalta, 13) and Piedad opened it.  We agreed I needed a new style and I told her I was in her hands – because I didn’t have enough Spanish to offer more concrete specifics.  I was encouraged that she had shortish wavy hair (not the typical long straight black) and I hoped that knowledge would help with cutting mine.  It was a luxury to surrender to whatever might happen. She insisted I have another coffee and made a great cup. Then set to and cut and cut and cut.  We all agreed (I think) that her cut took years off my life. Gave me back life. I felt so much better in myself. 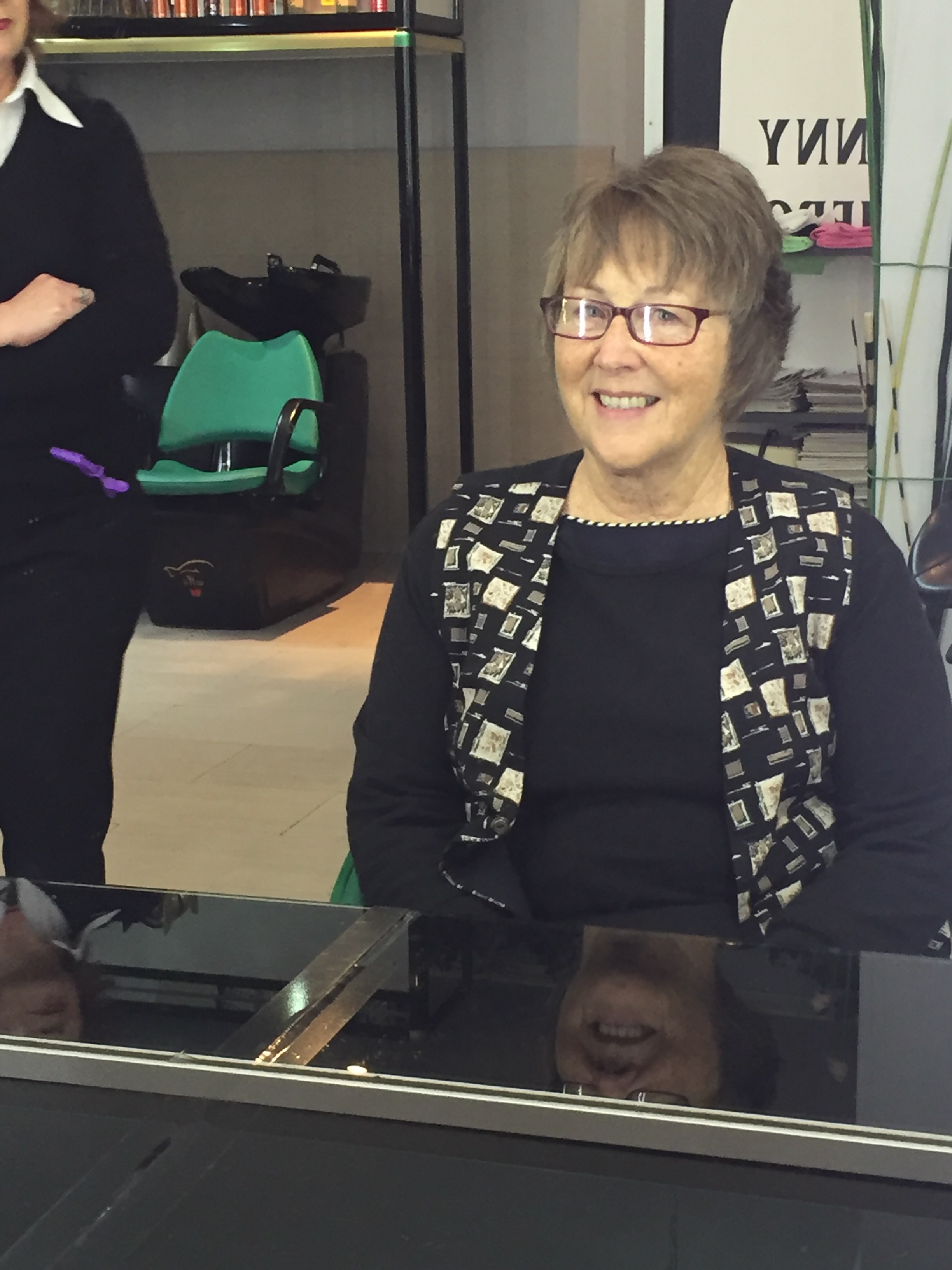 It was with a bounce in my step that I returned to the Prado to see no queue.  And when I booked myself in for the next two days starting at 1pm (yes June’s counselling for me to start later in the day has been heeded), the ticket seller informed me there would be no charge and that I should come to the adjacent counter tomorrow and all will be well.  Incredulous. So tomorrow, I will see inside the Prado, but the exterior will be known by me from pictures only.  A massive external conservation project is underway, and the building is draped. 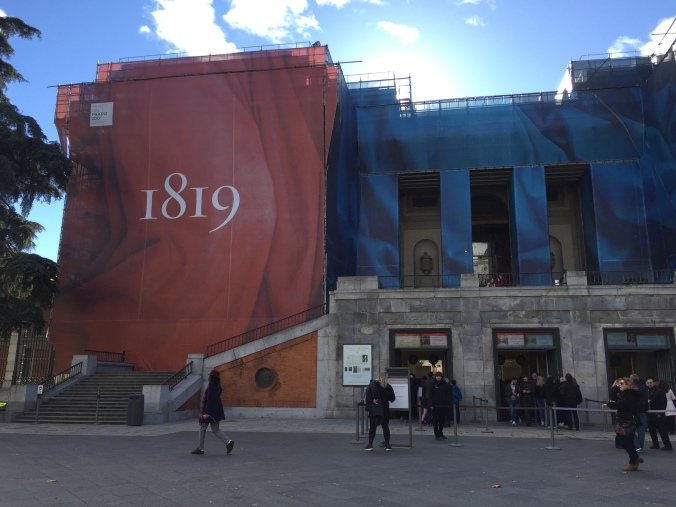 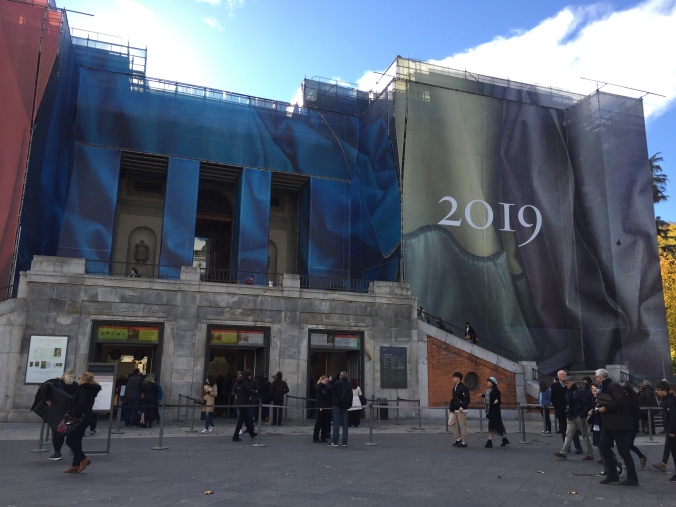 I found a tourism information booth and gathered some local intel.  Headed off for a tapas lunch but instead found a café devoted to the Cuban-Spanish association.  It was the black beans, rice, banana and salad I was after, but I ordered this dish because I was interested to see what a Cuban meal with the starter and the main combined on one plate looked like.

Then back to the hotel mid-afternoon for hours in bed – coughing.  But at least resting.  My room has a balcony looking over a main road and if the trees were missing, I would see the Prado.

Two doors and one with double glazing means I do not hear the traffic.

Overall, I think today has been a good one.  Will be better prepared tomorrow for the low temperatures outside.  May tonight give me sleep.