Look at how raw and rugged South Georgia Island seems just in profile on a Google map.  The second two maps are from a booklet ‘A Visitor’s Guide to South Georgia’ by Sally Poncet and Kim Crosbie published by Wild Guides Ltd UK. 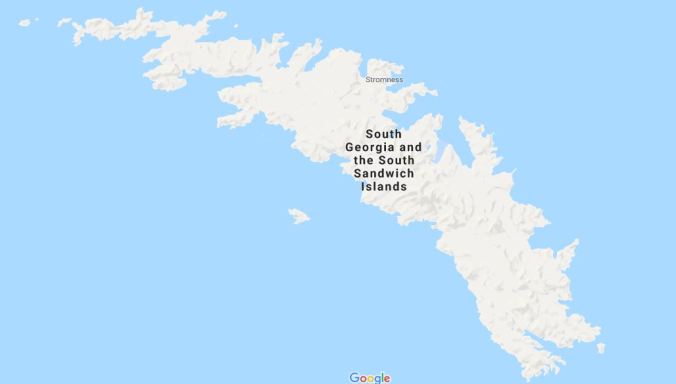 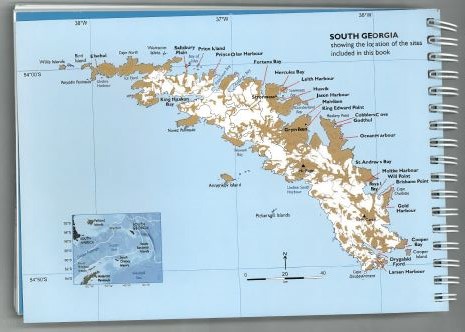 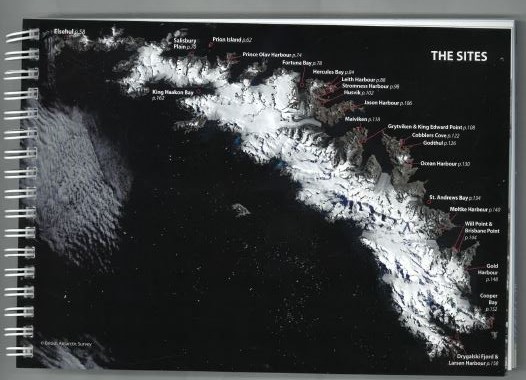 This is the posting you have probably been waiting for; hoping for.  A post where the story is not about me but about something large and majestic and more spectacular than you can imagine.

A blur of insanely steep mountains with massive snow patches and bare rock plunging into the sea appeared from the mist at 5.02am. ‘This is it’, I thought. ‘You have made it into the Southern Ocean. You have actually travelled to one of the remotest parts on earth. Inscrutable. Mysterious. But that snow and those mountains appearing through the clouds are real’. And I stood there feeling like I was glowing, emanating a light of happiness from within. 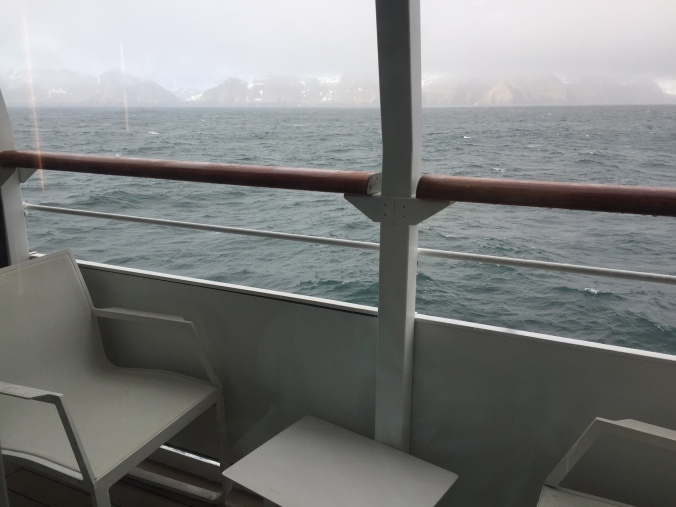 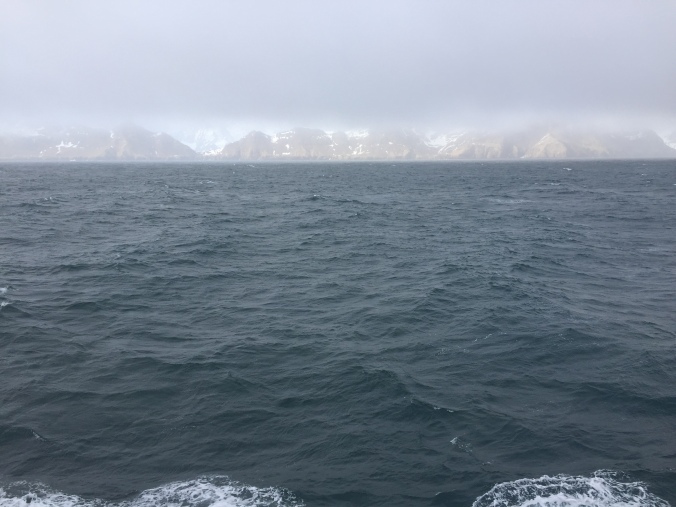 We were on the northern/eastern side of South Georgia Island and headed for Cumberland Bay and to the remains of the original whaling station at Grytviken and the currently operational King Edward Point settlements (for researchers). A little sun, emerging through cloud, lighted the settlements and made the snow fluoresce. 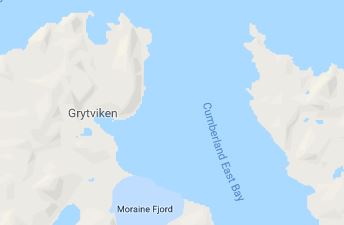 When sailing into Cumberland Bay the sky cleared, presenting stupendous views of the landscape. 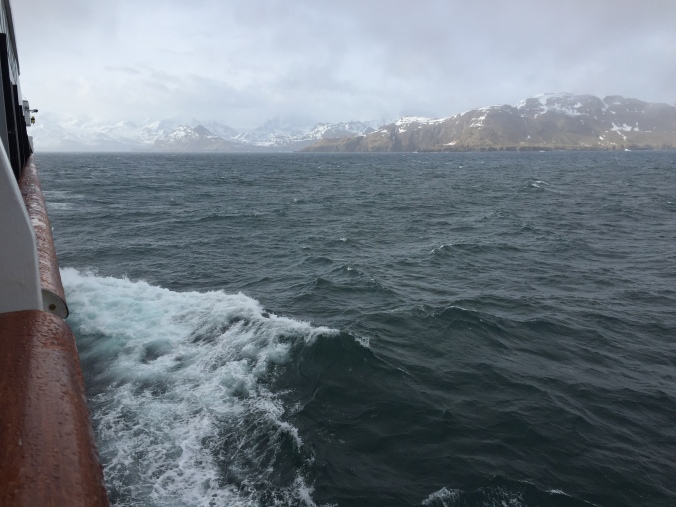 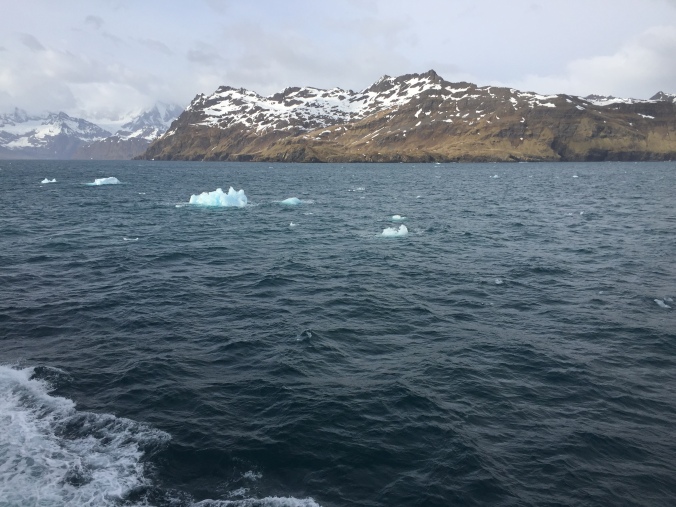 The tiny dots in the distance in the photos below were the red rooves (the red colour is so British, I thought) of the research station at King Edward Point.  A while later we were sailing past this research station. I could hear the grunts of the elephant seals on the beach and could see the uprights a cluster of King Penguins standing on a patch of snow.  I was thrilled to the core. 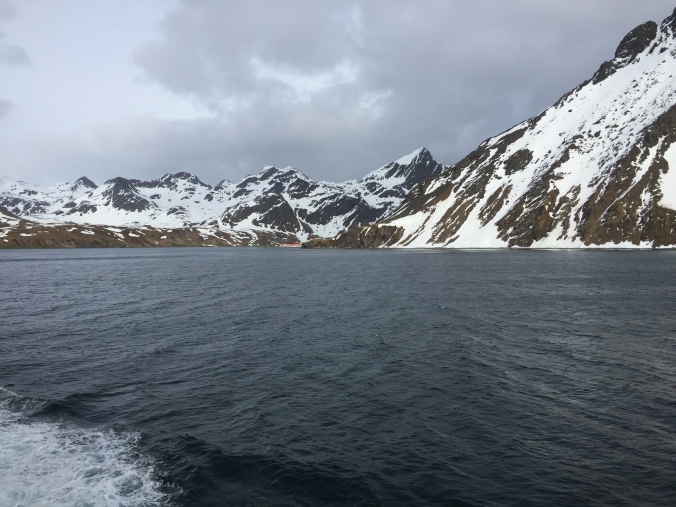 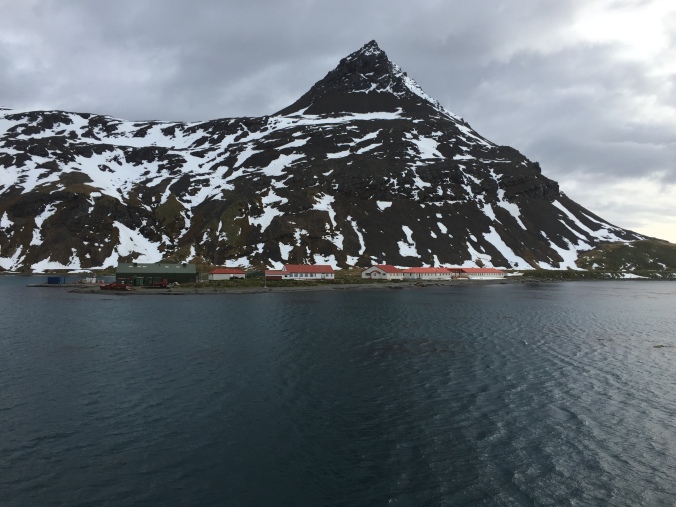 A few moments later Grytviken was in view, over wonderfully calm waters. 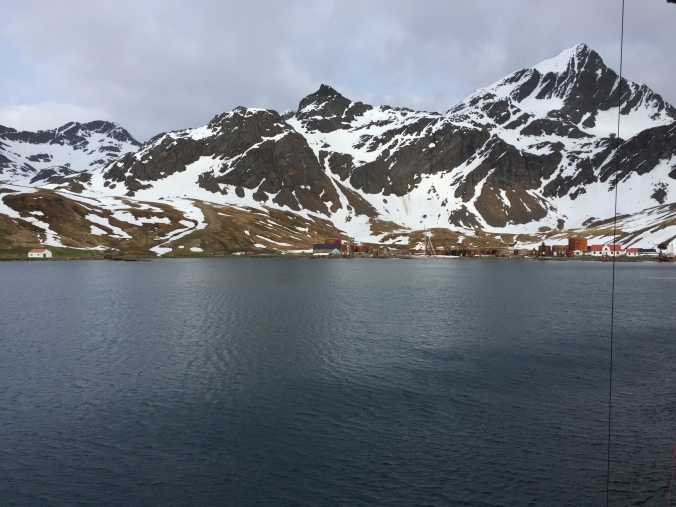 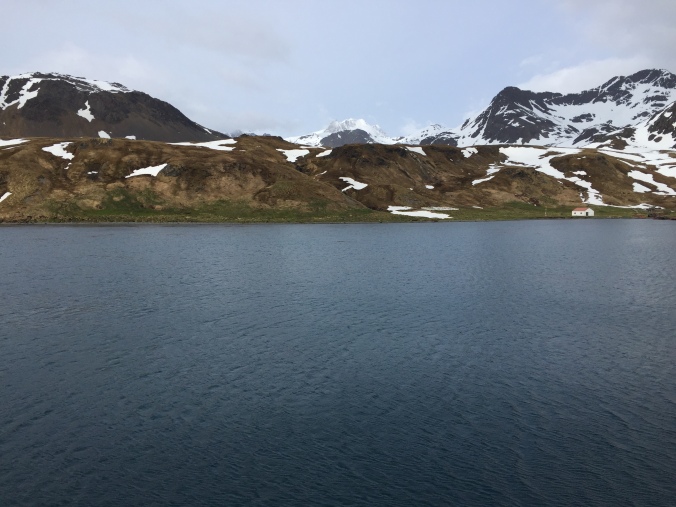 The first map below is from Google and the second from the Poncet/Crosbie book. 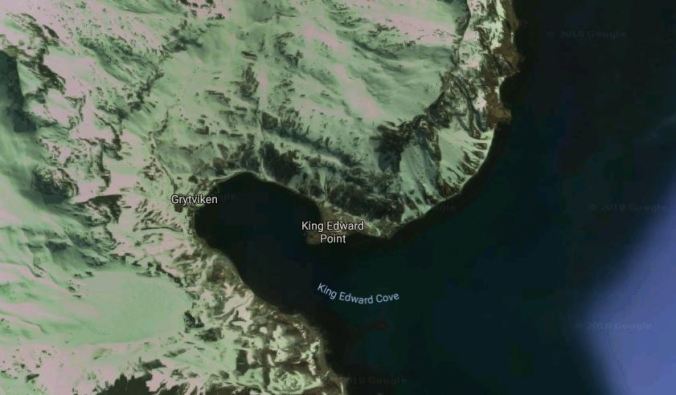 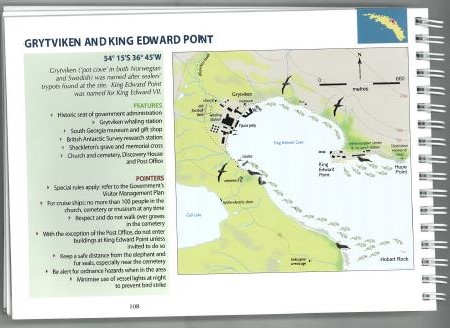 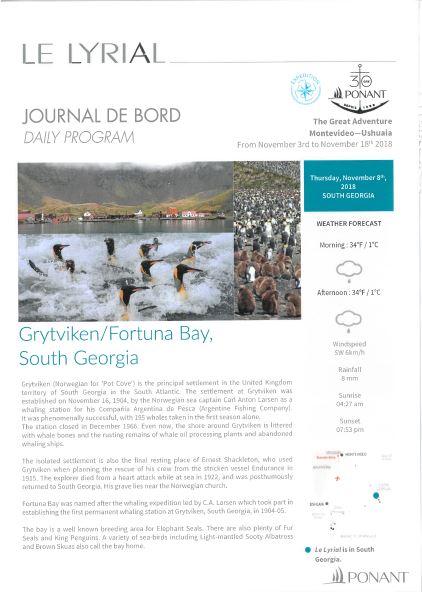 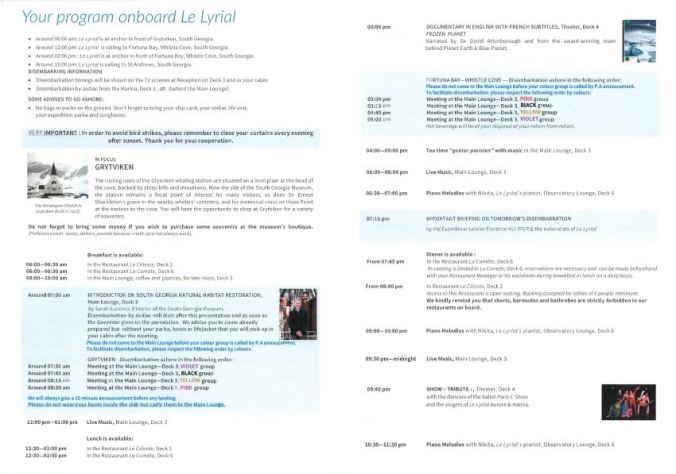 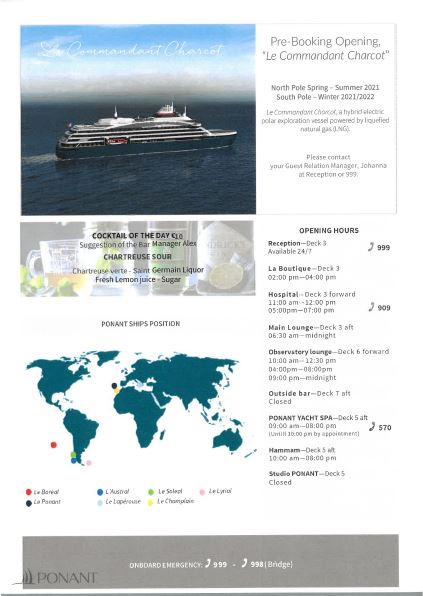 Anchor was dropped around 6.10am.  A Zodiac was put into position.

At 7 am we listened to a presentation from the Grytviken museum director and by 8am I was in the Zodiac with 9 others heading for shore.  The ship photographer was in attendance – I am second in on the left in the photo below. 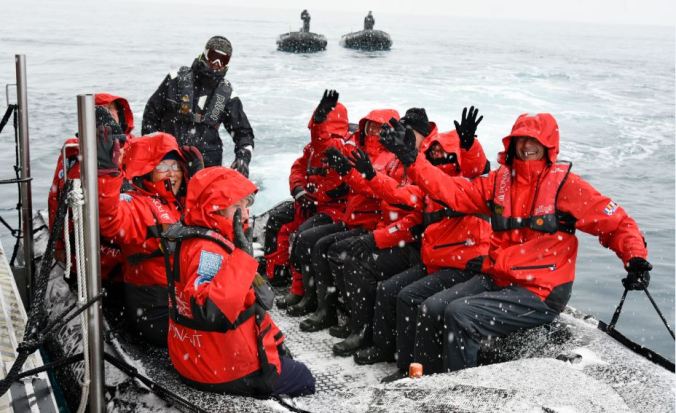 The Zodiac offloaded me below the Grytviken cemetery where my eyes were full of the novelty of a few fur seals and a few slumbering giants – the elephant seals – around about us.  I stood for a long while and tried to ‘arrive’. Unbelievably amazing to be on such a remote island with no wind. Just standing still. Just observing.

Encumbered by layers of clothing and bulky jacket and oversized boots, I had little flexibility of movement, so I was determined to move slowly and then benefit from having most passengers rush off and leave the spaces fairly people free.  I ambled up hill to the cemetery where the ground remained partially covered with snow. 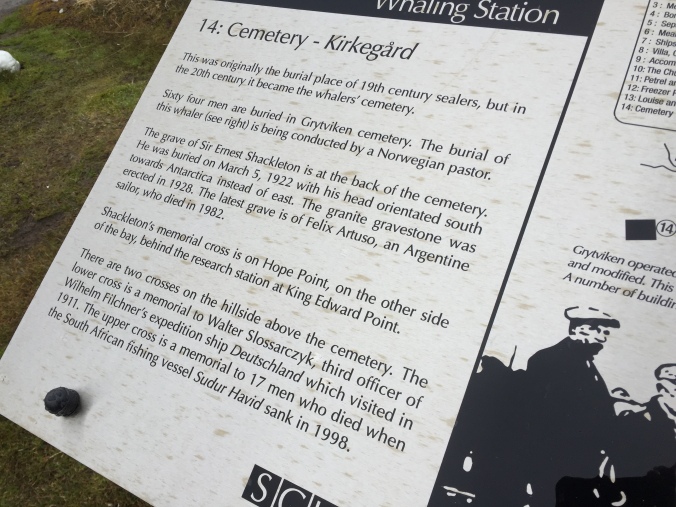 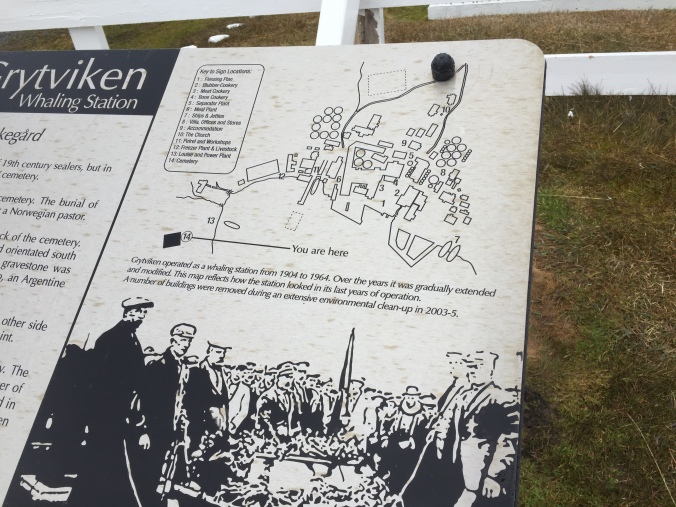 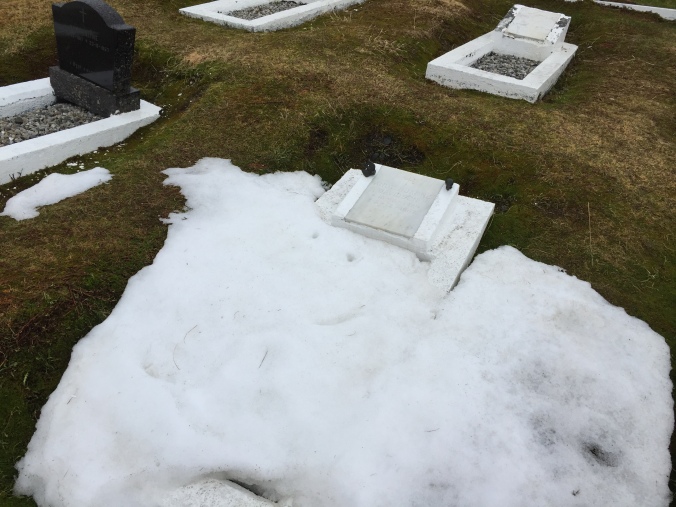 The non-standard ‘obelisk’ pictured in the rear at the left background marks Shackleton’s grave. 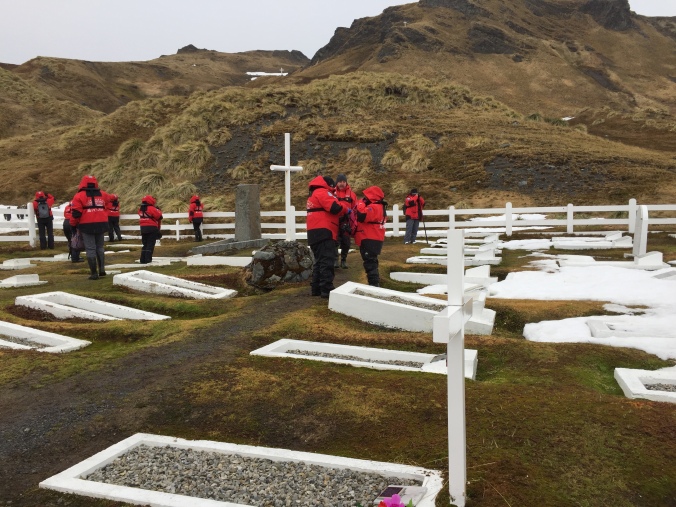 As the clouds offered a light sprinkle merging into rain, I pulled over my parka hood and tried taking photos with two layers of gloves to remove and replace for each photo and everything wet. It was all too much bother, so I stopped taking photos at the end of my cemetery visit and spent the rest of the onshore excursion simply looking from under the hood.  But Verity – before I stopped, I have couple of photos of Shackleton’s grave just for you – and for me and for anybody who is interested.  I thought I would be able to enlarge the photo to read the quite lengthy inscription on his headstone and so I did not memorise the words. Alas – I can see this is not possible. 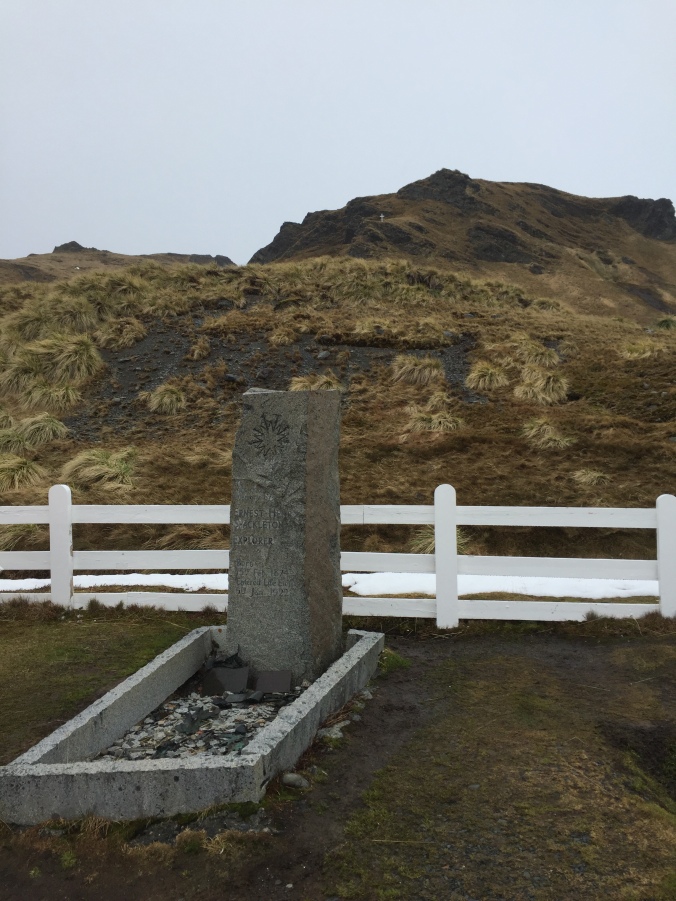 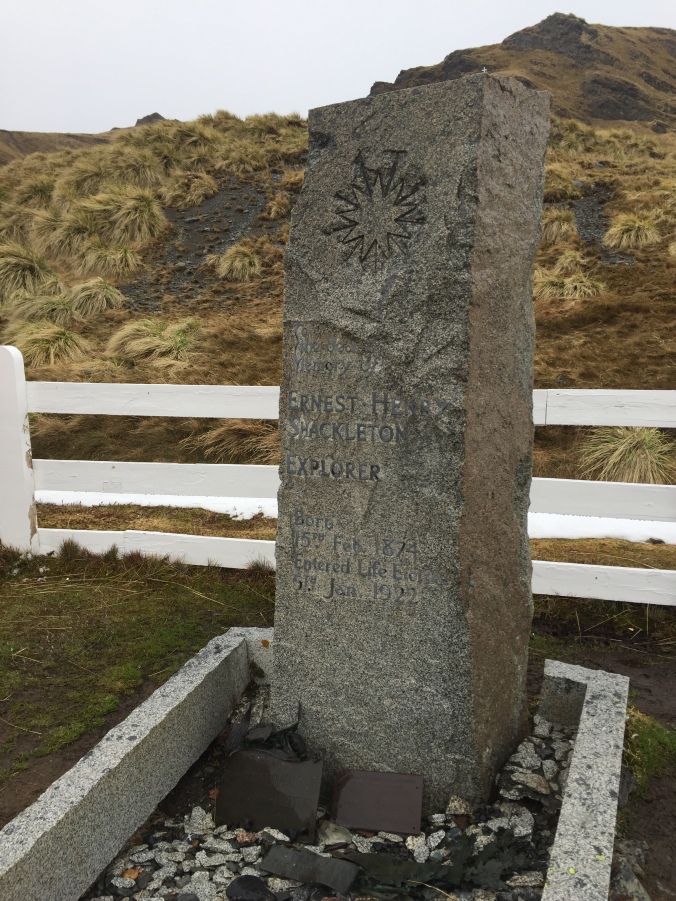 Before I left the cemetery, I stared at my first cluster of King Penguins in the process of their annual moult. Near the top left corner outside the fence was a patch of snow where they had gathered.  Standing and occasionally pecking themselves to remove their moulting feathers.  These were real. I was no longer consuming David Attenborough documentaries. So I stared and stared and tried to be in the moment. 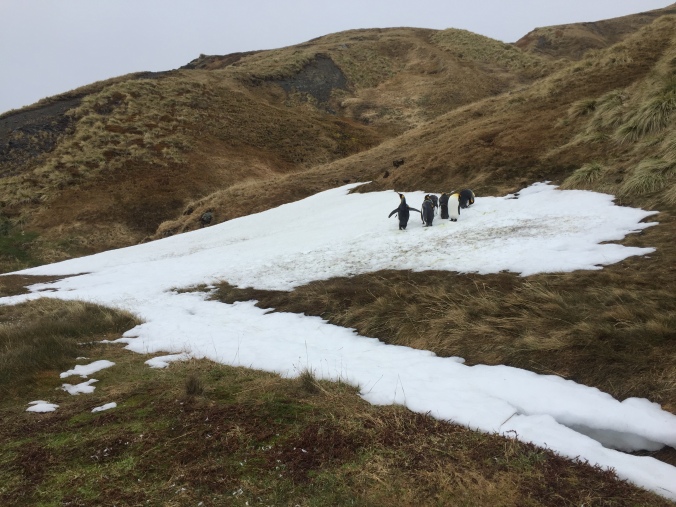 Wild was buried next to Shackleton but the colour of the gravestone and the wet light made it impossible almost to read, leave alone photograph, so I shrugged my shoulders and set out to be even slower and look and feel the environment more acutely. I hoped that when I returned to my cabin, I could type up my memories before forgetting.

I walked downhill across spongy ground with irregular channels and rivulets meandering over the land around me.  I plodded along past massive elephant seals, past historic and more recent buildings, experienced a young male fur seal walk across my path big noting himself, saw two ducks that are native to South Georgia Island, all before the rain turned to gentle sleet as I passed lots of disintegrating buildings, rusting boats, etc.

The following photo of elephant seals was published in the Poncet/Crosbie booklet. I saw the metal cauldrons as I walked through the persistent rain and snow flurries. 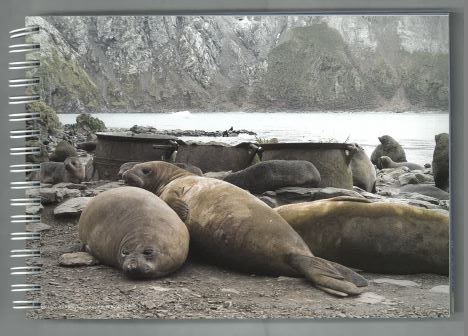 Finally, the sleet turned to gentle persistent snow.  I was wet, my backpack was wet, I hadn’t yet learnt how to manage the awkwardness of all my additional clothes nor how to keep the camera dry. We have been disappointed that the Antarctic parka given to us was designed with no flap over the outer pocket zips so the water seeps through the zip fabric and nothing inside the small pocket stays dry.  Despite placing my camera inside a zip lock bag, the outside of the bag was slippery and it was impossible to manage. Very poor design for a jacket that is meant to protect (and the leader of the Expedition team Florence told me as an aside that their special yellow jackets leaked). Not good.  We all learnt from this experience.

Through the down drafts of flaking snow I saw the white wooden Church and plodded inland. Many were taking shelter inside without a care in the world that this was a religious institution, one established by Norwegians last century. Everything was so difficult for me – the long boots, and the total wetness of everything meant that I was particularly careful climbing the stairs to the church entrance and then departing in the rain. I didn’t want to slip over and break a leg.  Not so early in the trip. Well not at all.

I continued through the remnants of this settlement, passed three more standing/moulting King Penguins, and directed myself towards the Grytviken Gallery which housed a replica of Shackleton’s boat. There is nothing like walking around a tiny partially open vessel to focus my attention on the mental strength and stamina required to sail for 800 miles from Antarctica to South Georgia Island. Very instructive.

I continued to the Post Office; this contained a mini museum to the rear, plus postcards and other items were for sale.  I could have purchased post cards and specialised South Georgia Island stamps; I thought of Mum and Dad and knew that’s what they would have done. But everything was so wet and it was so difficult to get at anything on my inflexibly packaged body without making it wet that I couldn’t face the prospect of finding a space to write a card and keep my address list dry, and find some money – and it couldn’t be credit card and had to be cash at the post office (in English pounds, Euros or Argentinean pesos). I had 28 euros with me (more on the ship but I had expected to buy a card and not much more. It was the bulk I was trying to manoeuvre within, and the wetness of everything that seemed to present insurmountable obstacles that was threatening to make me a grumpy old woman. In the end I purchased A Visitors Guide Book to South Georgia Island with my 28 euros cash plus one Euro loaned by a Frenchman who I will never recognise again – we were all penguins in red coats. Everyone gasped when I tendered the rest in minor Euro change which I had retained since my last overseas trip to Europe. I should say that I have guessed that I am probably the least wealthy by a million miles of every passenger on board.

Onwards I plodded to the nearby Museum. This building had many rooms containing excellent artefacts that helped extend my understanding of the history of the Grytviken and South Georgia Island generally.  I could have spent a longer time there.

A single masted yacht was moored at the jetty with young guys organising provisions. Nearby, 3 or 4 sunken boats/ships were in various states of disintegration.  I liked the enterprise of a white kelp gull that nested in grassy tussacs that grew out from the rot of a sunken boat. Kelp was washed up on shore and kelp tangles were visible occasionally in the bay near the water surface.

With snow gently resting on my wet back pack and my jacket and boots, I ambled some little way along the track towards King Edward Point then returned to the landing/departure zone to be Zodiaced back to the ship.  We could not have been more fortunate. There was no wind.  Snow drifted onto us.  All my layers kept me warm. There was a time when I removed my inner gloves because, with damp hands, they made it such an exercise routine to get the outer gloves over them.  So, hang the expense and later travel difficulty I may go to the ship Boutique and buy a proper waterproof backpack.

11.50am the anchor came up – 26 miles and 2 hours to get to Fortuna Bay to arrive around 2pm. As we moved off, I could see the King Penguins at the Grytviken cemetery were still as I found them a few hours previously.  Standing. Seemingly motionless.

Life and travel and art and culture in Tasmania