A new day and a new beginning.  That was my attitude even if my body was not quite ready for it. 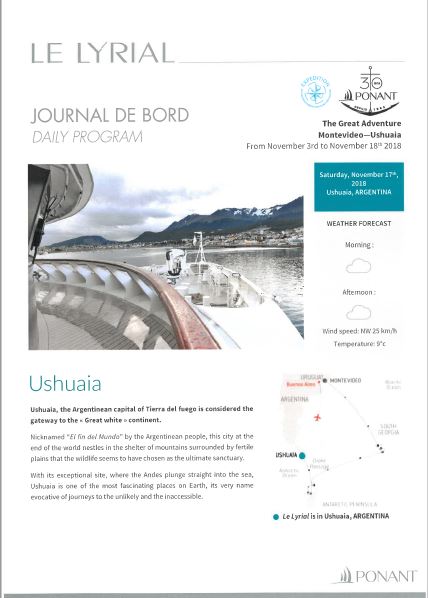 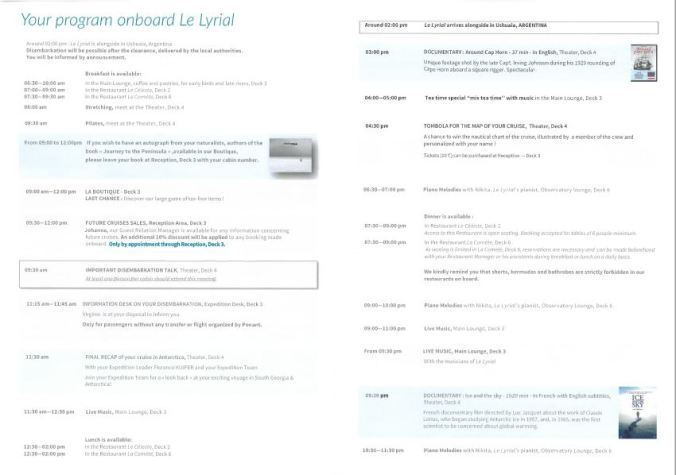 Woke around 5.30 and realised the extensive rock and roll had stopped so assumed that we had started into the Beagle Channel. We had left the mountainous seas of the Drake Passage.  Could see mountains in the distance. 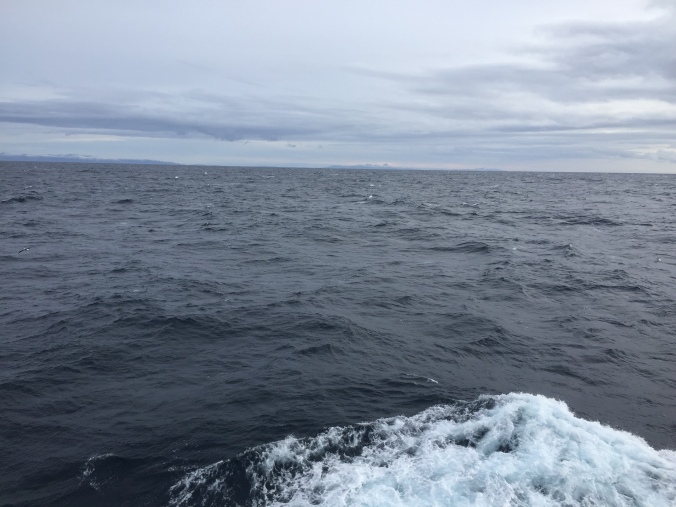 Feel very weak after a day without meals but better rested and believe that all the poisonous chemicals I have been taking are having some effect.  Went down to breakfast. Neil joined me, and we did a debrief on what we thought of this trip as it comes to an end.  While having breakfast not only could I see solid Argentinian land on my right (with lots of snow-capped mountains), but I had Argentinian islands up close on the left.  Back in the cabin I could see green trees and I am very happy. Its 9.15am and we have a ship group disembarkation chat in a short while. We can get off into Ushuaia this arvo and then return to sleep on the ship.  I am so weak not sure what I will do.  May try to sleep all morning to prepare myself.

At the disembarkation presentation so many people came up to me to check how I was; including people I didn’t know that they knew I had a bad cold.  When ill, this is really lovely because generally I was feeling so down and it was warming to think others had noticed.  Last night I was raging to myself that I had been foolish to book onwards to Spain and then Japan.  How could I have been so thoughtless.  What on earth made me think I wanted to not be at home and travel again.  Then I lay thinking about the consequences of cancelling forward bookings, returning home early and not continuing. But if my head wasn’t already done in by sleep deprivation and a bad cold, that really was too much.  It seemed easier to continue.  Despite being weak this morning it has already been suggested to me that when I get off at Ushuaia this afternoon (and hug a tree) I may get all my can-do energy back.  Oh – now a phone call has come through from reception; Miss strong French accent tells me there is someone who would like to talk to me.  Sure, I said. Its Peter here. I have some Fisherman’s Friend lozenges if you would like.  That’s really kind. Yes please.  And up he brings a packet of peppermint flavoured soothe-the-throat fresh mints.

Its almost 11.30am and there are now buildings lining the occasional shoreline stretch of what otherwise looks like impenetrable forest.  I wonder if they travel to and from Ushuaia by boat – no sign of roads. A medium sized yacht sailed past a while back.

Onshore looks like cold temperate forest sometimes on rocky hills and then a more Alpine vegetation on the slopes of nearby partially snow-covered mountains.

I believe the maximum temperature will be 9 degrees today but, with wind-chill, I imagine dressing for 5 degrees might be the smart option.  Yes.  I am feeling excited that I can get off soon, and that it will be possible to stay off in less than 24 hours. Hallelujah.  I was never sea sick even amidst very rough seas. I was mostly happy with the onshore options. I had low expectations of getting decent vegan food and they were met.

And then I could see Ushuaia edged by high peaks with their snow stripes.

We arrived into port at Ushuaia smoothly with little breeze and around 2-2.30pm we were free to leave the ship.

We poured off the ship without passports armed only with our room/cabin card.  There were no immigration or customs procedures and we loved the process and wished the rest of the world was so relaxed.  Or perhaps common sense prevails:  who in their right mind would be drug or arms running from Montevideo to Ushuaia via Antarctica!  That’s right. No-one.

I eschewed the plans of others to take a mini tourist train in the Tierra Del Fuego national park. Instead off on my own I had a pleasant afternoon wandering the streets but with most time spent at a colossal museum housed in the old prison (which was built to house convicts in the 1890s).  One gaol cell display space was devoted to historic gaols in Australia – couldn’t work out why.  Maybe Port Arthur for the convict link but the others???

The method for shackling prisoners was something I had not previously seen.

Some of the museum had been repaired or cleaned up but other parts were in original disintegrating condition. Very illuminating.

Within the very large museum complex was an art gallery holding large penguin sculptures.  These were creative and fun to look for.  Examples include: 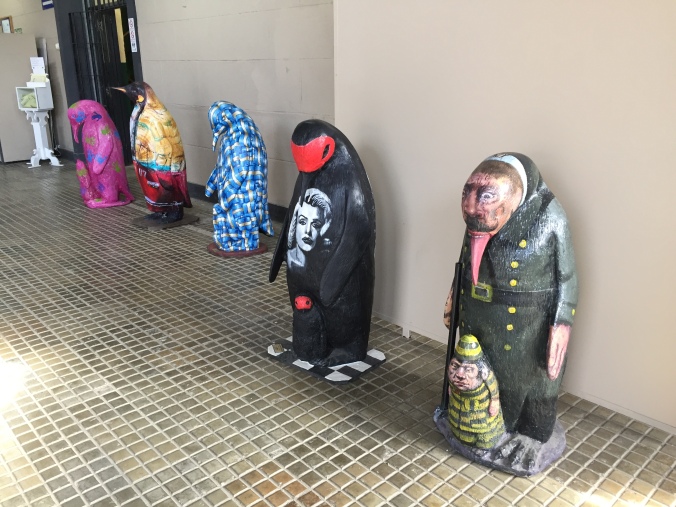 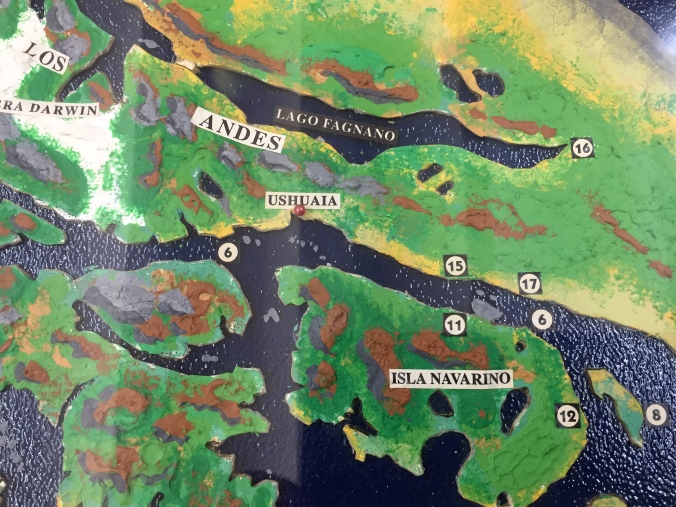 It wasn’t cold outside around town although cool.  We are located at 54 degrees south compared to Tasmania’s 42 degrees south so that needs to be taken in to account. I wore only a t-shirt and my normal non-Antarctic jacket and was comfortable.

After I left the museum I wandered along the streets of Ushuaia and heard most languages except Spanish; this is a serious tourist town with people waiting for cruise ships to take them south.

Some museums were shut.  No surprises there. 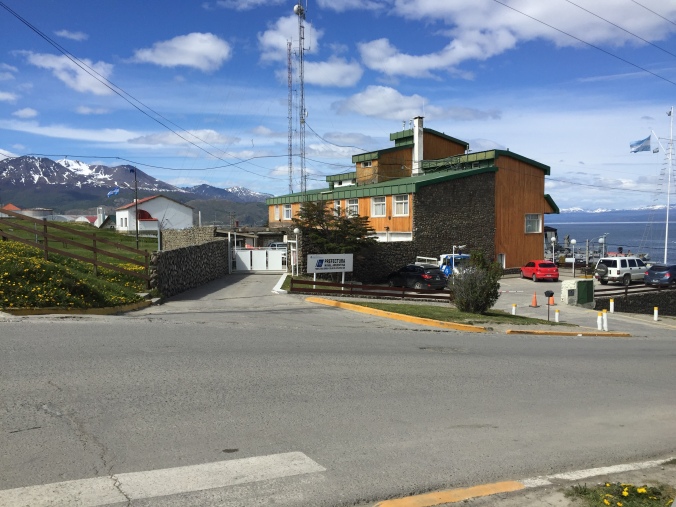 The architecture is a mix. I liked the look of the older corrugated iron buildings with their coloured walls.

Mostly I think of Ushuaia as the dandelion capital. Spring had sprung these golden flowers in every nook and cranny. Luxuriating.

As I walked into the centre of town, children were everywhere. I first noticed some playing chess. 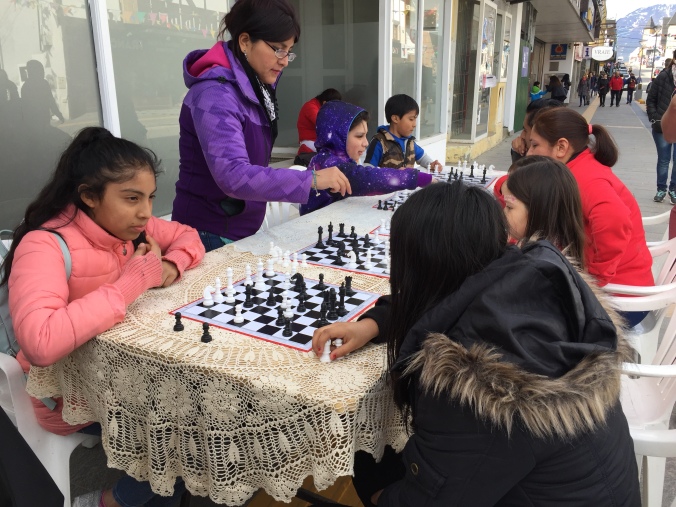 Then I saw different stalls lining the street edges all devoted to some game or learning for children to get involved with. At  another corner, loud pop music filled a vacant block;  food was offered for dancing children. The colourful church attracted my attention. 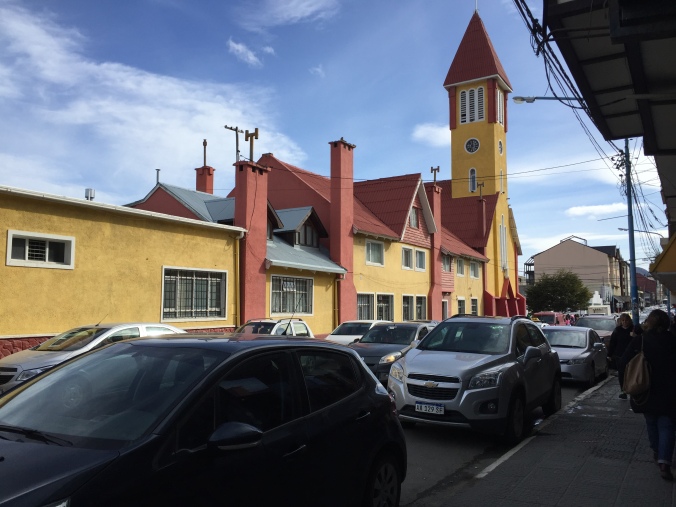 Inside a service was being held with children attached to parents. Obviously the focus was children that day.  Apart from the bright happy colours, the highlight in this building was a superb stained glass window near the entrance.

Then I plodded along the wharf.  It wasn’t the city that interested me, only the mountains.

Back to the ship for the last time.

I have coughed my way around Ushuaia and now I am very tired. As much I would like to kick on tonight with everyone for the last night together, I may eat dinner and then disappear.  But then – I can’t be trusted to make a decision and stick to it. Tomorrow morning, we must be out of our cabins permanently by 8am so I want to get some catch up sleep before then.